Mumbai Indians are one win away from booking a Playoff berth, whereas KKR are coming off six defeats on the trot.

If one was to carefully follow the IPL standings in the first two weeks of the current season, Kolkata Knight Riders seemed favourite to be one of the first teams to book a Playoff berth, and for their opponents on Sunday, the Mumbai Indians, it looked to be a herculean task.

But how quickly do things change in this format? We have approached the final leg of the IPL, things have turned about completely. MI are just one win away from ensuring their place in the final four, while for KKR, they are placed third from the bottom and need to win all their remaining games to keep their dream alive.

And the first hurdle they face is MI, quite easily one of the more dominant sides this year after a lukewarm start to their campaign. The only team to beat Chennai Super Kings, MI have lived up to their favourites tag, steamrolling oppositions and closing out close matches. Almost all their players have performed, some occasionally, some frequently.

In the previous game, Rohit Sharma scored his maiden fifty of the season and the experience of Lasith Malinga provided the finishing touches. MI are surely a team to watch out for as they stand one step away from sealing their Playoff berth.

On the other hand, KKR have endured a downward spiral, losing their last six games in a row. The only other team to have faced this dubious distinction was the Royal Challengers Bangalore and they lay at the bottom of the pile, with KKR just two positions behind them. Their over-dependence on Andre Russell has left them exposed and although skipper Dinesh Karthik got back among the runs with an electric 97, it wasn t enough to save them the blushes.

MI share a solid record over KKR in head-to-head encounter and based on current form, only a miracle will help KKR reduce the deficit.

Weather: Hazy conditions with the temperature rising to 30 degree

At this stage, nothing KKR does seem to be working for them. But considering how expensive Carlos Brathwaite fared giving away 16 runs in two overs and scoring five off three, KKR might consider bringing Harry Gurney back and expect him to have a good day. Besides, the experiment of Shubman Gill opening the innings didn t work as well and Narine could go back up where he s most effective.

Mumbai Indians have been solid, coming off a comprehensive 46-run win over CSK. MI should best stick to the same formidable combination and seal they Playoff berth, leaving the scope of experimentation for their final two-three matches. 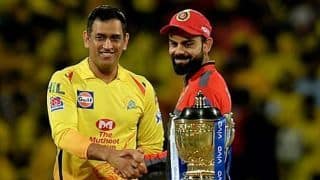