Breaking a streak of low turnouts seen during the just-concluded Test series against the West Indies, Barabati stadium today witnessed a packed house for the first one-dayer between India and the West Indies. 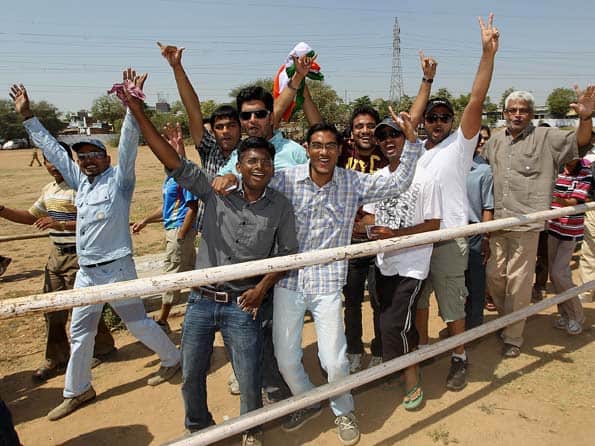 Breaking a streak of low turnouts seen during the just-concluded Test series against the West Indies, Barabati stadium today witnessed a packed house for the first one-dayer between India and the West Indies.

Such was the excitement that even at the time of the toss the stadium was packed to the brim.

Earlier yesterday, the stand-in skipper Virender Sehwag said that playing in front of a jam-packed stadium is different experience altogether.

“We love to play with a big crowd behind. It’s a beautiful ground and a very good wicket to bat on,” Sehwag, who is leading the team in the absence of M S Dhoni, said.

The numbers are even more significant considering the fact that India are playing a young side with Sehwag the most experienced in the line-up.

However, fans do not have much knowledge of the West Indies line-up apart from the mighty Kieron Pollard, who is known in this part of the country for his IPL stint with Mumbai Indians.

But that did not deter the cricket-starved public here from coming out in numbers to the venue, as people were seen queueing in since early in the morning to get an entry into the stadium that has 12 entry gates.

People were waving the tricolours and displaying placards with some wearing team jerseys of Tendulkar, Dhoni, even as the big two are missing from the action.

“We have come here to cheer the Indian team. We don’t get to see much of Indian cricket team here so it’s worth coming here. We have bought four tickets of denominations Rs 3000,” said Ravindra Padhi, a contractor, who travelled 250 kms from Baripada along with his three friends, to see the match.

“There are no stars but we don’t mind paying hefty sums to watch them. As we don’t know when we get to see a match next,” added Amar Pattanayak, another member of the group.

His remarks in fact summed the plight of the smaller yet finely organised centres like Cuttack that are not as ‘privileged’ as Nagpur or other smaller venues, which get regular matches.

The overwhelming response should also lift the spirit of the Board, which seemed concerned about low turn out at the Eden Gardens earlier this month.

The last time Cuttack hosted a match was about two years ago on December 21, 2009 when India defeated Sri Lanka.

The revamped stadium with a capacity of about 45,000, witnessed a huge demand for the tickets with people queueing up at the counters since 1 am on the opening day of the sales.

The new-look Barabati has three new stands, along with air-conditioned corporate boxes, which were constructed during the Orissa Premier League (OPL) held earlier this year.

“All tickets put up for sale for the public have been sold out. We never expected such an overwhelming response. We are really happy,” OCA secretary Ashirbad Behera told PTI.

“The OCA has erected six giant screens at different locations in the city for those who missed out on a ticket to watch the match live,” added Behera.