Henry, 52, died on Saturday from injuries sustained in a vehicular accident on Thursday.

St. George’s (Grenada): The Grenada Cricket Association (GCA) was on Sunday mourning the death of its former president and council member Gabriel Henry in Cuba.

Henry, 52, died on Saturday from injuries sustained in a vehicular accident on Thursday. He was in Cuba to attend his daughter’s graduation as a medical doctor when the accident occurred, reports CMC. Mahmudullah sad that rain robbed Bangladesh vs South Africa 2nd Test of result

Gabriel Henry Jr. confirmed his father’s passing with a message posted on social media “My father ‘DADDY’ just passed away”.

President of GCA Dwain Gill expressed sadness on Henry’s death saying that the cricketing family will miss him. Australia’s top order needs to be ‘little bit tougher’ to come back in The Ashes 2015: Michael di Venuto

“On behalf of the members of the GCA and my own family, I wish to offer condolences to the family and friends of Gabriel Henry. Our prayers are with them,” he said.

At the time of his death Henry was the president of the St. David Cricket Council and represented the parish on the GCA. Sarfraz Ahmed’s non-selection in T20s will be looked into: Pakistan selector Haroon Rasheed

“As a cricket administrator, Gabriel was an advocate for youth development not only in St. David but in Grenada as a whole. The cricketing fraternity will miss him dearly.”

Besides his involvement in cricket, Henry was a former football official and officiated in the domestic leagues. Stuart Broad desperate to fill in for James Anderson in 4th Test at Nottingham 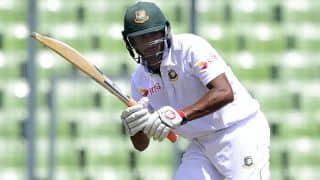