According to the local media reports, Galle Cricket President Premasiri Halambage was assassinated in his car early on 17th of August. Premasiri was along with his son who was in the car at the time of assassination. He was rushed to the hospital immediately but unfortunately he could not survive. It is unclear if his son was injured in attack. Just a week after the organisation hosted the second Test between Sri Lanka and Australia at their ground, Premasiri has been assassinated. Premasiri was appointed as the association’s president last month in controversial circumstances while the reason for his assassination is still unknown.  FULL CRICKET SCORECARD: Sri Lanka vs Australia, 3rd Test at Colombo

According to smh.com.au, members were said to have been locked out of the Galle International Cricket Stadium by the important committee when the vote was scheduled to take place and eventually Premasiri was elected to power outside of the ground. His appointment was challenged by the Sri Lankan board, however any moves for a new vote to take place on August 27 were temporarily blocked by the courts just days ago. ALSO READ: Mitchell Starc goes past Richard Hadlee

Premasiri played 70 first class matches and was a well-known businessman. His brother is believed to have been killed in similar circumstances in 2011 after an argument between two families Police are yet to identify Premasiri’s attackers, however they believe two fled the scene in a white car.

Amidst all this, Cricket Australia have given a statement saying that their on-going Sri Lankan tour won’t be affected due to this incident as the reminder of matches are not in the area where this incident took place. Having already lost the 4 match Test series, Australia are to play 5 ODIs and 2 T20s. 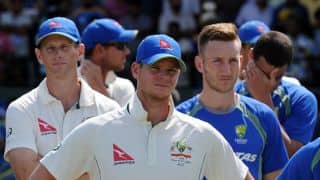 Australia’s horror run in subcontinent next to only West Indies’