India's star opener Gautam Gambhir declared himself fully fit for the upcoming cricket tour of England for which he has devised a specific batting strategy to counter the seaming conditions there. 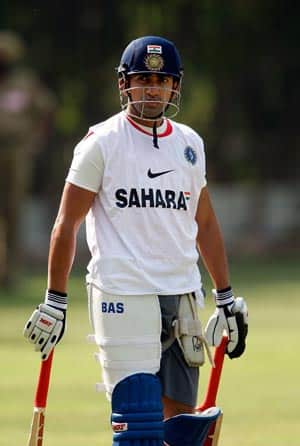 India’s star opener Gautam Gambhir on Thursday declared himself fully fit for the upcoming cricket tour of England for which he has devised a specific batting strategy to counter the seaming conditions there.

Gambhir, who skipped the ongoing tour of West Indies due to a shoulder injury, reckoned that “mental adjustment” will be a key to the Indian batsmen overcoming the conditions in England and said certain strokes would have to be avoided.

“I am back at my full fitness and feeling fresh both physically and mentally. The pain that I had in my shoulder is gone,” Gambhir told PTI in an interview here.

“Before returning from Bangalore I batted in the nets against the likes of S Sreesanth and I didn’t feel any discomfort. Even in Delhi I will resume practice in a day or two,” he said.

The 29-year-old left-hander, who has 3234 runs in 38 Tests at an average of 51.33, will be playing Test matches for the first time on English soil if he is picked for the series starting July 21.

All excited about the challenge, Gambhir said he is working hard on his game.

“I think it begins with mental adjustment. One has to see the ball early and play it late. For some time now I’m not playing on rise. At the top level one has to tighten up his game and I have done that,” said the batsman who has 4073 runs in 114 ODIs at an average of 40.73.

“In England, for first few balls you can’t drive on the up till you are very sure. There are certain other strokes one should avoid. The rest I’d do it when I reach there,” he added.

In the interview, Gambhir spoke about a range of issues, including his relationship with skipper Mahendra Singh Dhoni and former India coach Gary Kirsten and the cramped international schedule.

Gambhir was still fuming about the furore his IPL stint created after it came to light that he was carrying a shoulder injury while captaining the Kolkata Knight Riders before their eliminator match against Mumbai Indians.

The injury, which Gambhir picked up during the World Cup, eventually ruled him out of the ongoing series against the West Indies, where he was initially chosen to lead the side in the ODIs after Dhoni took a break.

Asked whether he could have avoided the controversy by opting out of IPL after first experiencing discomfort in his shoulder, Gambhir said, “I think the whole episode was a bit unnecessary, just a ploy to sell news. The most unfortunate part was that it somewhat took the limelight away from the good work done by Kolkata Knight Riders.”

“I feel sad for guys like Iqbal Abdullah, Manoj Tiwary, Shaqib-Al Hasan, Rajat Bhatia and many more who had done so well in IPL but because of this unwanted controversy the focus shifted somewhat. Look, I have always been committed to the team that I represent, that’s my upbringing.

“My family values have taught me to be committed and that’s what I do for a club team, state team, country or a franchisee. I know how hard I have worked for my India cap and what it means to me. I can’t deride the honour of playing for India,” he asserted.

But his focus is completely on England, where India is scheduled to play four Tests and five ODIs, and Gambhir said Andrew Strauss’ men are the team to beat right now.

“Well, let me get picked first. If I am, like always I’d put my heart and soul into the effort to get my team to a good start. I think England is the team to beat besides South Africa at the moment.

“They have their tails up boasting a world class bowling attack which has really tall fast bowlers and a spinner who is pretty good as well,” he said.

Gambhir said beating England in their own backyard would also reaffirm India’s number one status in Test cricket.

“We’ve given a good account against South Africa in Test matches earlier this year and go to Australia later. If we do well in both England and Australia I think we’d have honoured our status of being the number one Test team,” he said.

Asked if the quality of English bowling attack gives the hosts a slight advantage given that India are too reliant on Zaheer Khan in the pace department, Gambhir said, “See, any team at home are always a handful, England are no exception.”

“But mind you we have beaten teams at Perth, Durban, Johannesburg, Headingley, in fact we won the Test series in England last time around. Zaheer is a class act and I think with the support of others he can pose some serious questions to the English. The series will be fun,” he insisted.

India have just one practice game, against Somerset, before the Test series but Gambhir said it would be enough to get acclimatised to the conditions.

“I think having one game is fine. There have been tours where we haven’t played even a single practice game but still one. It is the hunger that helps the teams win but one can’t undermine the relevance of proper and focused practice,” he said.

One of the few Indian players to have backed the controversial Decision Review System, Gambhir welcomed the BCCI’s nod to its usage in the England series.

“I am all for DRS and for that matter any technology that helps get better results. There is no doubt in my mind that science has a lot of space in decision making in cricket. I am happy BCCI has now adopted the system which should help in getting more accuracy,” he said.

Asked whom would he rate as the best captain in contemporary cricket, Gambhir maintained that a captain is as good as the team.

“I have always maintained a captain is as good as his team. Whatever KKR achieved was not about my captaincy but the team which includes the support staff. MS is a good colleague who has his own style, he stays calm under pressure. Once again there are no best captains for me but only best teams,” he said.

On what influence former India coach Gary Kirsten had on him, the left-hander said, “Oh he had a big influence. He was a lot like me – intense, too demanding off himself, perfectionist and a trier.”

“We had some great moments. I remember he gave me a lot of names. Initially he called me a Rock, then it was Banker. It was flattering to be called with such names. Gazza was fantastic, I miss him,” he added.

As the talk veered towards the international calendar and how cramped it has become, Gambhir said cricketers know the schedule well in advance and can ask for breaks when they feel fatigued.

“See as a professional cricketer you know the FTP in advance and to complain about it is a little out of place. If anyone doesn’t want to play there is enough transparency in Indian cricket where a cricketer can request for a break.

“There have been instances where many cricketers have taken a break only to return whenever they felt like. BCCI deserves credit for the same,” he said.