India were 243 for three at lunch, still needing 225 runs to avoid innings defeat. Tendulkar (70 batting) and VVS Laxman (44 batting) put on an useful partnership of 75 runs for the fourth wicket during the first session. 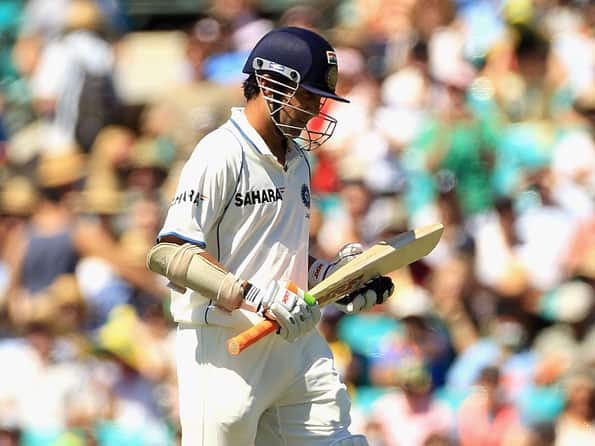 Sachin Tendulkar was firmly in sight of his 100th international century as Indian batsmen showed lot of character during the opening session on the fourth day of the second cricket Test against Australia.

The visitors were 243 for three at lunch, still needing 225 runs to avoid innings defeat. Tendulkar (70 batting) and VVS Laxman (44 batting) put on an useful partnership of 75 runs for the fourth wicket during the first session.

While Tendulkar hit nine boundaries, Laxman had five hits to the fence during the session.

India, resumed at 114 for 2 this morning, lost overnight batsman Gautam Gambhir (83) but scored 129 runs off 27 overs during the two-hour session.

Tendulkar, who once spent 51 balls without scoring last evening, was in his stride straightaway and reeled off a series of fours off Ben Hilfenhaus, all square of the wicket on the off-side.

The iconic batsman, unbeaten on 8 last evening, began with a back cut for four off Hilfenhaus and followed it up with a steered boundary in the same direction in the same over.

Gambhir deliberately glided a James Pattinson delivery through slips for a four and wicketkeeper Brad Haddin let one slip through his gloves for four and 18 runs were taken from the first two overs.

Tendulkar continued to go for deliveries pitched outside the off-stump and played the square cut to good effect.

Before Hilfenhaus was through his first spell of 3-0-21-0 this morning, Tendulkar picked up his fifth four off the same bowler in the same direction.

Gambhir, at the other end, was sedate without being overtly productive though he did hit Pattinson emphatically through covers to move into the 80s.

The introduction of Siddle from the Paddington End brought about Gambhir’s downfall. The southpaw over-reached in trying to negotiate a delivery on the stumps and ended up steering a catch to deep point.

Gambhir made 83 from 217 minutes and faced 142 deliveries. The Delhi batsman hit 11 boundaries during his first innings of note in this tour.

Laxman, who came to the crease with scores of 2,1,2 from three innings, was dropped on nought by wicketkeeper Brad Haddin down the legside off a Siddle delivery.

The right-hander then got into his stride and what helped him was the introduction of off-spinner Nathan Lyon into the attack.

Laxman hit his first boundary as his supple wrists ensured that Lyon delivery travelled through the mid-wicket region. The he drove Siddle through the covers. Another cover drive off Lyon got the Hyderabadi stylist on his stride.

Due to the enterprise of the batsmen this morning, Indians added 79 runs from 13 overs in the first hour’s play.

Hilfenhaus now came back into the attack and Laxman made a delightful cut to bring the 50-run stand for the fourth wicket.

Tendulkar was not to be undone either and he square cut Pattinson ferociously, followed by a single, to move into the 60s. Looking to assert his dominance over the home attack, Tendulkar upper cut Pattinson over slips for a four, much to the bowler’s annoyance just before the break.