Ganguly has said that CAB will not compromise on the distribution of complimentary tickets of the first T20I between India and West Indies to be played at the Eden Gardens on November 4.

Sourav Ganguly, Cricket Association of Bengal president, has said that the state association will not compromise on the distribution of complimentary tickets of the first T20I between India and West Indies scheduled to be played at the Eden Gardens on November 4. As per the new BCCI constitution, 90 percent of the tickets is reserved for the public, while the remaining 10 percent is availed to the state association for its usage.

However, a report in the Indian Express suggest that out of that allotted percent, the BCCI wants its separate share for their use, a move that Ganguly and CAB are not in favour of.

“We will have to give the complimentary tickets which we have been giving. We cannot compromise on that. And I completely understand the problems faced by Indore/MPCA and I m totally with them, because the practical problems are never understood. Their claim is completely legitimate,” Ganguly told the daily.

It should be noted that the same deadlock between BCCI and the Madhya Pradesh Cricket Association may result in the shifting of the second ODI from Indore, with Vizag primed to be the new venue to host the match on October 24. Ganguly added that he and CAB will not budge from their stance, even if that leads to the possibility of the game being move out of Eden Gardens.

I cannot go and ask the government agencies, bureaucrats people who make the match happen to collect tickets and pay, Ganguly said. I don t know what they (BCCI) will do. If they want (to take the game away), they can. But we are not going to compromise.

Ganguly, explaining the pattern in which tickets are distributed, mentioned that the CAB is entitled to provide tickets to its many units, including first and second division clubs and more, which makes it almost impossible to change the distribution system.

“Police here are the most supportive. They charge the least. To provide security for every game, they charge peanuts. In return, they want tickets. So, this is practically not possible (conforming to the 90 per cent-10 per cent ratio). It will not be possible to sit down at the ticket counter and ask the government agencies and all those people who facilitate these matches to pay for tickets.”

“Not only the affiliated units, the honorary and life members too are entitled to complimentary tickets. And we have to give about 2,000 tickets to the NCC. So it s not possible. They (BCCI/CoA) don t understand the practicality (of the matter), Ganguly said. 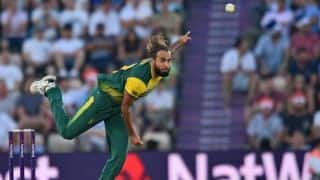