England middle-order batsman Gary Ballance on Sunday brought up his third half-century in Test cricket during the third India-England Test at Southampton. Ballance faced 107 balls and hit five boundaries to achieve the feat during the 56th over of the innings.

Ballance, who came into bat after the dismissal of Sam Robson, batted well with England captain Alastair Cook to take his side to a strong position on the first day of this Test match. Ballance and Cook have so far added 102 runs for the second wicket as England reached 157 for one after 56 overs.

At lunch, England went to lunch at a decent score of 78 for one against India in the third Test at Southampton. For the first time in the series, the English batting looked solid in the face of some probing Indian pace bowling, despite losing a wicket before lunch. Alastair Cook looked very secure for his unbeaten 48 runs, and seemed on the way to finding his lost form.

India s opening bowlers Bhuvneshwar Kumar and Mohammed Shami got some good movement off the pitch, but a complete lack of pace in the surface meant that neither bowler was able to trouble the batsmen too much. The introduction of Pankaj Singh, making his way for an injured Ishant Sharma, brought about an edge from Cook, but it was put down by Ravindra Jadeja at third slip. 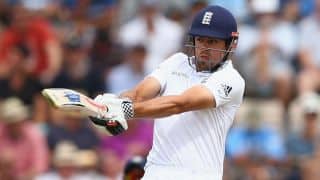