After being beaten hands down by India in the opening game against India, South Africa coach Gary Kirsten is hoping for reversal of trend as they take on Pakistan in a must-win game at Edgbaston on Monday. 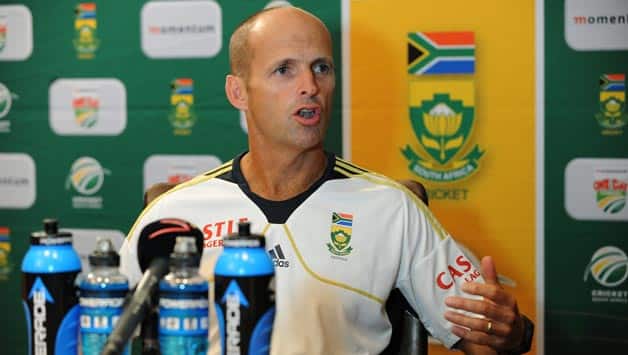 After being beaten hands down by India in the opening game against India, South Africa coach Gary Kirsten is hoping for reversal of trend as they take on Pakistan in a must-win game at Edgbaston on Monday.

Both teams have lost their first group B ICC Champions Trophy fixtures.

With one eye on Dale Steyn‘s fitness, South Africa coach Gary Kirsten feels losing against India could turn out to be a good omen for the Proteas.

“Generally, what we do is play very well and then lose, so maybe it’s not a bad thing that we haven’t fired yet. I like to think of that as a bit of an omen,” Kirsten said in Birmingham on Saturday.

“But the problem with this competition is that we can’t have another bad game because then we’re out of the competition,” he added.

South Africa lost their first game India by 26 runs in Cardiff and the 1998 Champions Trophy winners cannot afford to drop more points. Kirsten is still upbeat despite the fact that Steyn is still not sure to play.

“I’ve been with this team for two years. Morne has been injured once and Dale has never been injured. Now it’s come together. That’s a curveball,” he said at the team’s training at Edgbaston.

“But I’d like to think that if we’ve grown as a one-day team, guys can replace them and do well. We can either use it as an excuse when we play badly or it can be an opportunity for some new guys to come in and make an impact in as tough a competition as you can get,” Kirsten said.

The update on Steyn is only marginally better. Last Monday, the world’s No.1 fast bowler was injured during a warm-up match against Pakistan at the Oval after bowling just five overs. Pakistan won the game by five wickets.

“Dale is a work in progress as far as recovery is concerned. We can only get him to start bowling once he is symptom-free,” Mohammed Moosajee, South Africas team manager and doctor, explained.

“It’s a challenge, because if we allow him to bowl and the injury is aggravated, we will be back to square one. The physiotherapist is working hard on him and taking it day by day. It’s a wait and see thing,” Moosajee said.

Newcomer Chris Morris almost certain to make his ODI debut against Pakistan. Morris replaced Morne Morkel, who was forced to return home after suffering a groin injury against India in Cardiff on Thursday.

With Morris certain to make his debut, Kirsten is banking on his pacers to fight Pakistan, who lost to the West Indies at The Oval on Friday.

“We want to have five fast bowlers that we can pick at any point. I don’t see our fast bowlers as one being better than the other,” he said.

“We don’t have much time. We’ve got to play well from here on in. So we have to play well and not half-well.”

Brad Haddin scores century for Australia A against Scotland