If a bunch of 12 or 13-year-olds get a chance to interact with the most successful coach of the Indian cricket team, it's a class they would never want to bunk. 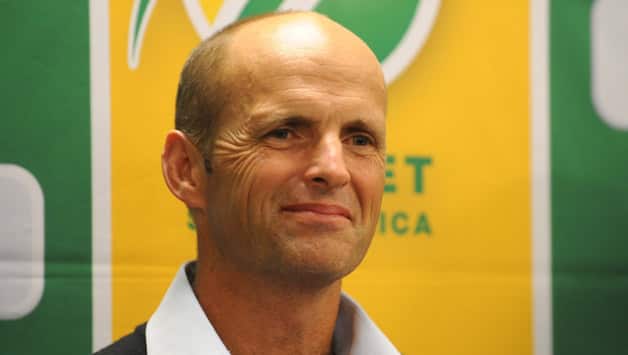 Gary Kirsten believes there are no guarantees to success © Getty Images

If a bunch of 12 or 13-year-olds get a chance to interact with the most successful coach of the Indian cricket team, it’s a class they would never want to bunk.

It was no different for the 100-odd school cricketers who got a chance to attend former India and current Delhi Daredevils chief coach Gary Kirsten’s coaching clinic where he spoke about some of the technical aspects of the game.

In the camp organised by the GMR group, Kirsten spoke on various aspects of batting and said when it comes to facing spinners, there are no peers to India captain Mahendra Singh Dhoni.

“Watch MS Dhoni’s batting carefully. How he gets behind the ball when he plays spinners. Apart from stepping out for hitting sixes, he always takes spinners on the backfoot. He always gets low while defending or attacking on backfoot. There are many good players of spin bowling in India but he is one of premier players,” Kirsten told the school cricketers while showing Dhoni’s stance and technique.

“Batting is a side-on game and will always remain that. You have to remain side-on in order to hit the balls on both sides of the wicket. At the end of the day, if you are batting, you have to score runs. You have to develop a technique. No point hitting a glorious cover drive or a wristy flick and then get out,” were some of the words of wisdom from Kirsten.

If batting is all about being side-on, how did Shivnarine Chanderpaul get so much success with that unusual chest-on stance, Kirsten replied, “But at the time of hitting the shot, he would get side-on. So that proves what I am saying.”

While he enjoyed his interaction with the kids, Kirsten defended dourly questions asked about Virender Sehwag‘s future with the Delhi franchise.

To a question if he would suggest the owners to retain Sehwag for over USD 2 million considering his current form and batting position, Kirsten laughed out loud. “I am not going to answer that question,” was all he said.

However just like his batting which had a safety-first approach, Kirsten said that there are no guarantees to success.

“Obviously, you would like to take the franchise at the top but there are no guarantees. We will give our best shot. I wish I was selling a product in super market which could have changed things!”

On the launch of the Inter-School T20 tournament for the Daredevils Cup, GMR’s Marketing head Hemant Dua said, “The idea is to expose the school kids to a systematic coaching programme where the veterans of the game would impart state of the art coaching. We plan to organise many more such camps across the Delhi and NCR region.”

Daredevils’ Mentor TA Sekar said, “It’s always a great fun to interact with the young boys. They are enthusiastic and would want to soak in every piece of information. I hope that if they can implement a part of it in their game, we would consider this endeavour to be a success.”