In a career spanning from 1992 to 2011, Gary Neville appeared 400 times for Manchester United and played 85 internationals for England.

Gary Neville has won 20 trophies with Manchester United. In a career spanning from 1992 to 2011, Neville appeared 400 times for United and played 85 internationals for England. His father Neville Neville (no typo there) was a professional cricketer for Greenmount in the Bolton League. It’s a well-known fact that both Gary and Phil were good cricketers before they made it big in the world of football. The former English defender in an interview with Wisden Cricket Monthly revealed that it was cricket that toughened him up in his early years.

Neville would play his first game for United in 1992 but earlier that year, as a 17-year-old, he would score a century alongside a 20-year-old Matthew Hayden to guide his side to the final of the regional knockout competition.

“My dad played cricket every Saturday … it was an institution in our lives. I would say cricket toughened me up in my early years a lot more than football, because I was playing in third, second and first team until the age of 15. We were playing with men, some professionals of that time, fast bowlers, with your helmet on. It was really scary,” Neville recalled.

When Neville was 14, he was out mankadding. He remembers the lesson he learned.

At the time I blamed him and thought it was unsporting but actually looking back at it now, ‘I need to be smarter, shrewder, cuter’. The idea that you think you’ve been conned is actually not right, you should be smart enough. So cricket did teach me a lot in the early years about adult sport – mentality, the importance of winning, but also the social side of it,” he recalled.

Parallels between Australia and Manchester United in 1990s and 2000s

England and Australia contest in The Ashes, and expect no pleasantries at that stage. However, this Englishman drew parallels between the dominant United side under Alex Ferguson and the world-beating Australian side of the same era.

“McGrath. Warne. Gillespie. Gilchrist. The Waughs. Hayden. Taylor. That Australian side was everything I would want in a team. You know what I love? The mentality. They were always on the front foot and they never backed off,” he said before throwing light on the mental toughness with similar situations.

“That United team, you’re 3-0 down against Tottenham, but you’re thinking, we score one and we’ll win this. That’s the thing about that Australian team too. They know they’re not beaten. The great teams apply pressure. Not just pressure on the pitch, but pressure up here [points to his temple].”

Coming to the cricket reference, he recalled his match-winning partnership with Hayden.

“I hit a bad shot, and Hayden came up to me and said, ‘Concentrate, I don’t want any of that crap, this is not the time’. That mentality of ‘You don’t get out, you don’t give your wicket away’. That was something I didn’t value enough. He did. Even then. He valued his wicket,” he added.

Neville’s England and United teammates, brother Phil and Paul Scholes too were his teammates at Greenmount.

They had to either take up cricket or football. Neville was upset to give up cricket at that stage but in hindsight it was a good call, isn’t it? 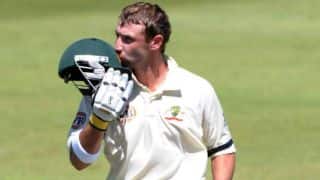