Kolkata Knight Riders have been led to a fine start by the openers Gambhir and Uthappa.

The Kolkata Knight Riders (KKR) have been led to a fine start by the openers Gautam Gambhir and Robin Uthappa against Royal Challengers Bangalore (RCB). The batsmen have looked in fine touch and KKR skipper, Gambhir, has carried his form from the previous match into this game. Even Robin Uthappa has played confidently so far. LIVE UPDATES: Kolkata Knight Riders vs Royal Challengers Bangalore

The RCB attack was launched by Sean Abbott and Harshal Patel, but both were quite ineffective and they strayed on the batsman’s pads too often. Gambhir and Uthappa capitalised quite well and runs have flown much to the excitement of the crowd at Eden Gardens. The batsmen have sailed past their individual 25-run marks. LIVE SCORECARD: Kolkata Knight Riders vs Royal Challengers Bangalore

Earlier RCB won the toss and decided to bowl first at the iconic Eden Gardens. Their bowlers didn’t have an ideal start and the fielding was sloppy. There were plenty of loose balls and the batsmen have capitalised early on. KKR, having beaten MI, in the IPL opener will be confident entering the contest against RCB. IPL 2015: Complete Coverage 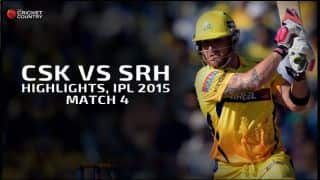