Gauram Gambhir said the Jamaican belongs to a new breed of fearless cricketers.

The West Indies batsman rescued the defending champions from 60 for five against Kings XI Punjab, and piloted them over the line with four wickets and 13 balls to spare. His fiery knock of 66 from 36 balls was embellished with nine fours and two sixes. Full Scorecard: Kings XI Punjab vs Kolkata Knight Riders

“’I think this is the new breed of cricketers we are seeing. They are fearless who just go out and express themselves,” said Gambhir referring to Russell at the post-match presentation ceremony. Andre Russell’s blitz helps Kolkata Knight Riders beat Kings XI Punjab by 4 wickets

Asked about Suryakumar Yadav who too played a little cameo, the skipper said,” We should try and get him to face more deliveries, he is someone who can take the game till the end.”

Gambhir, who got only 11, said despite the top order collapse, he believed his team could win as long as Russell and Yusuf Pathan (28 not out of 24 balls) were there at the crease.

“We were under pressure, but we knew that if Russell and Yusuf are there till the end, we will win. He’s (Russel) a great lad, he’s a great guy to have in the dressing room,” he concluded. 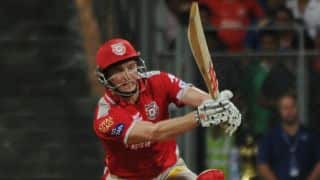