Regular India skipper Virat Kohli was rested from the Asia Cup after a gruelling England tour where the team played three Twenty20 Internationals, three one-dayers and five Tests. The series took a toll on Kohli, who reportedly had complained of back troubles towards the end of the tour.

With the home series against West Indies in sight, and importantly, the tour of Australia later in the year, selectors decided to rest Kohli from the six-nation tournament in the UAE.

Before the India versus Pakistan match on Wednesday which Rohit Sharma-led side won by eight wickets, two channels invited former Pakistan cricketer Tanvir Ahmed and Team India veteran Gautam Gambhir as guests for their show.

During the discussion, one of the comments passed by Ahmed did not go down well with Gambhir, who is known to be quite outspoken with his views. Ahmed called Kohli a deserter for having skipped the Asia Cup.

“(In my view Virat Kohli has run away. He played the entire Test series in England. He suffered a back problem in the limited-overs series in England. He continued to play despite that. When a player can play a series against England for his country battling a back issue, then he could have managed to play in Asia Cup as well. Kohli knew that India might have to play with Pakistan on three occasions including the final which is why he ran away..).”

Expectedly, Gambhir slammed Ahmed s response. Virat Kohli has 35 to 36 centuries to his name. Tanvir doesn t even have 35 international matches to his name.

India next face Bangladesh in the opening Super Four stage of the Asia Cup on Friday. 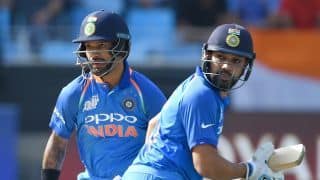