Gautam Gambhir led Kolkata Knight Riders to a comprehensive eight-wicket victory over the Delhi Daredevils in their Indian Premier League (IPL) 2014 clash at the Feroz Shah Kotla, Delhi. After winning the toss, Kevin Pietersen elected to bat on a good batting track. Delhi scored 160 for five and in reply, Kolkata were never troubled during their run-chase as Gambhir and Robin Uthappa put up a 106-run opening stand.

After the nightmare at Ahmedabad, Kolkata would breathe a sigh of relief. Gambhir and Uthappa put up a their second consecutive 100-run opening stand and that laid the foundation of a victory. There were no hiccups this time as they went on to win the game easily. One may say that Delhi’s bowling lacked the bite to effect a miracle like the Rajasthan Royals managed at Ahmedabad.

Both Gambhir and Uthappa were dominant from the outset. They picked their opportunities to attack and kept rotating the strike. In the powerplay, they raced away to 51 and kept a good hold over the asking rate. They got to their 100-run stand in the 12th over and by then, they were firmly in control of the game. Even when Uthappa fell for 47 in the 12th over for 47, Kolkata weren’t troubled. Manish Pandey came out and supported Gambhir in the run-chase. Gambhir got to his fifty in 39 balls and then it was quite a canter at the end. Gambhir raced to 69 off 56 balls and fell when Kolkata were only ten short of the total. Ultimately, Kolkata won win 10 balls to spare.

Chasing 161 on a belter wasn’t going to be difficult. In fact, when Delhi batter, they lost momentum in their middle overs and again it was a late surge that helped them to their eventual score. There was a quick start from Quinton de Kock and then they lost two wickets to stall their progress. Dinesh Karthik smashed a quickfire 36 off 22 balls which had some very good shots. The one that stood out was a scoop off Jacques Kallis for a six over fine-leg.

In the middle overs, Kolkata bowled well and broke the momentum for Delhi. Shakib was the star of the day for them with one for 13 in his four overs. On the other hand, Sunil Narine was expensive as he gave away 38 runs in his four overs for one wicket. It was his most expensive spell in the IPL. This was mainly due to the assault at the death by JP Duminy and Kedar Jadhav. The duo were at it again as they smashed 54 in the last four overs with some great hitting. Narine’s last two overs went for 17 and 11.

Man of the Match: Gautam Gambhir. 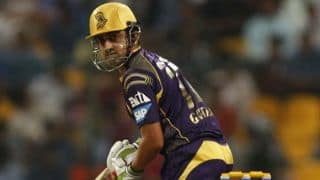