Gautam Gambhir was run-out in a mix-up with Robin Uthappa.

Gautam Gambhir was run out in the third over of Kolkata Knight Riders’ run-chase of 149 against Chennai Super Kings at Ranchi. This is the first game of the India leg of the Indian Premier League (IPL) 2014. There was rain at Ranchi and as a result, the game was reduced to a 17 overs a side contest. In three overs, Kolkata are 20 for one. Robin Uthappa is in the middle with Jacques Kallis.

There was a change in Kolkata’s opening combination as Uthappa walked out with Gambhir. Ben Hilfenhaus conceded only three runs in the first over and was on the money for a major part. The only blemish was when he bowled a shoulder high full-toss to Gambhir, who guided it through the off-side for a single to get off the mark. Click here for the Live Blog of the IPL 2014 game between Chennai Super Kings and Kolkata Knight Riders

Ishwar Pandey came on to bowl the second over and Gambhir cut the second one over point for a four. And off the next ball, he was nearly bowled as the ball hit Gambhir’s pad and almost went onto the stumps. Uthappa came on strike and he drove the third ball gracefully through the covers for four. The fourth ball was guided by Uthappa through the mid-on region for a four. Click here for the live scorecard of the IPL 2014 game between Chennai Super Kings and Kolkata Knight Riders

Gambhir was run-out in the third over when Uthappa charged and inside edged one ball, which was stopped by MS Dhoni behind the stumps. Gambhir had almost reached the striker’s end when Dhoni threw it to Hilfenhaus and he did the rest.

Earlier, Chennai had won the toss and chose to bat first. However, just as the toss was done, the rain started coming down soon after and that delayed the start of the game by an hour and 40 minutes. As a result of the delay, the game was reduced to a 17 overs a side affair. Brendon McCullum’s 56 helped Chennai post 148 for three in their 17 overs. 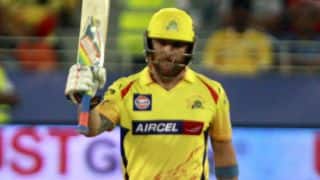