Kolkata's chances of making it to the play-offs look very tough as they have secured 15 points from 14 games.

With his side’s chances of proceeding to the playoffs looking slim, Kolkata Knight Riders (KKR) skipper Gautam Gambhir on Saturday said his boys messed up the Indian Premier League (IPL) game against Rajasthan Royals (RR). “Obviously our destiny was in our hands, but we seem to have messed it up. Lot of credit to the Royals,’ said Gambhir after the nine-run defeat at the Brabourne Stadium.

The skipper said the 199 for 6 posted by the Royals would have been tough to overhaul as chasers on any wicket. He also praised man of the match Shane Watson, who struck a 59 ball 104 for the Royals. In reply to the Royals’ challenging score, the Kinghts could manage 190 for 9. “199 would be tough on any wicket. Credit to Shane the way he batted. If a top order batsman bat through more often than not they’d win. 170-180 could have been an ideal total, we knew it would he high-scoring,” said Gambhir.

Kolkata’s chances of making it to the play-offs look very tough as they have secured 15 points from 14 games. They are now placed fourth, but would be overtaken by the winner of the Sunrisers Hyderabad (SRH) vs Mumbai Indians (MI) match. However, Knights could be in with a chance if the Hyderabad-Mumbai match is washed out.

Another mathematical possibility favouring the Knights could be if in the other Sunday outing, Delhi Daredevils inflict a very huge defeat on Royal Challenger Bangalore. Talking about the title holders’ campaign, Gambhir said “The points table shows all sides are quality. It’s one of the difficult leagues to play. We’ve played reasonably good cricket but there are games we should have won. That’s why we’re here. “It’s going to be tough, but you have to take it on your chin and move on” 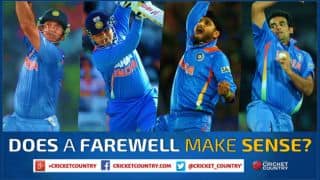