Post the victory, Gautam Gambhir revealed that all his prize money in IPL 2017 would be given to the families of the CRPF martyrs, who lost their lives recently in the Sukma attack in the state of Chhattisgarh.

Gautam Gambhir is in a rich form. On Friday, he struck a fine unbeaten 72 for Kolkata Knight Riders (KKR) to help them win against Delhi Daredevils (DD). Not only has Gambhir reclaimed the Orange Cap for the most runs in IPL 2017, but he has also helped KKR retain the top position in the points table. Post the victory, Gambhir revealed that all his prize money in IPL 2017 will be given to the families of the CRPF martyrs who lost their lives recently in the Sukma attack in the state of Chhattisgarh. Gambhir had earlier pledged to look after the education of the children of the killed officials. Full Cricket Scorecard, Kolkata Knight Riders vs Delhi Daredevils, IPL 2017, Match 32

Whatever awards I ve earned till now and going to earn, all money goes to CRPF jawans, Gambhir said after receiving the Man of the Match. Gambhir recently wrote an emotional blog where mentioned how the killings at Sukma had affected him: The recent CRPF attacks in Chhattisgarh were still fresh in my mind. On Wednesday morning I picked up newspapers and saw gut-wrenching pictures of the daughters of two CRPF men killed in the latest attacks. One of them was saluting her martyr father while in the other picture the howling young woman was being consoled by her relative. ALSO READ: Gautam Gambhir to bear education expenses of killed CRPF officials’ children

He had also expressed his disgust through a series of tweets. Gautam Gambhir Foundation will take care of the entire education expenses of the children of these martyrs. My team has already started work on this and I shall soon share progress we have made, he added in his blog.

At the prize-distribution ceremony Gambhir also warned his side against complacency as they have won 5 out of their 7 games: We still have a long way to go. So far most of the boxes are ticked. But this is that type of tournament that we can t be complacent. The way bowlers got us back into the game, at one stage we thought that DD would get 180-190, it was unbelievable. It comes on better in the evening. It is about not losing too many wickets in the first three overs. You have to have faith in your bowlers. We have never picked players with hope that they will deliver; we ve always had faith in them.

Once upon a time, it was Robin Uthappa, who had sealed his spot for the opener s role for the 2007 ICC World Cup ahead of Gambhir. Years on, there is no competition as the two men have played massive roles in KKR s dominance in recent years. Gambhir and Uthappa added 108 runs for the second wicket today.

This was Uthappa s second fifty in a row and fourth in the tournament. Gambhir was all in praise of him added, The way he is hitting the ball, I ve not seen many people hit it the way he s hitting it.

However, Gambhir was far from happy with his KKR s fielding efforts: There is always room for improvement. We can put more effort in the field. Any run you save, the less you have to score.

KKR will next play defending champions Sunrisers Hyderabad at the latter s home ground on Sunday. 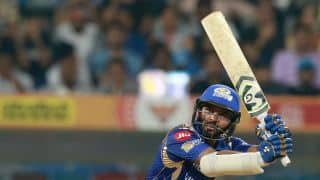