Kolkata Knight Riders skipper Gautam Gambhir on Tuesday said the defending champions tag would not put any pressure on his team, which would look to play fearless cricket when it takes on Delhi Daredevils in the IPL opener at Eden Gardens, Kolkata. 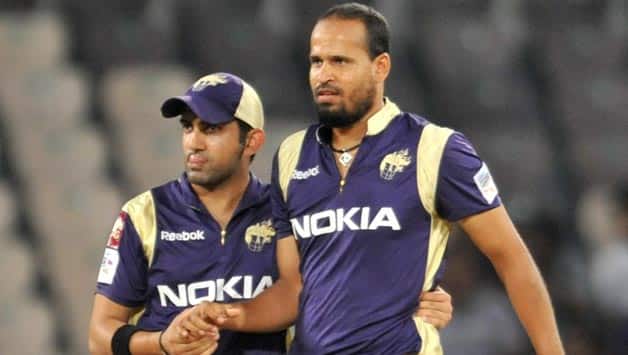 Gautam Gambhir (left) said everyone in the Kolkata Knight Riders team need to fire, including Yusuf Pathan, who had an woeful last season © AFP

Kolkata Knight Riders skipper Gautam Gambhir on Tuesday said the defending champions tag would not put any pressure on his team, which would look to play fearless cricket when it takes on Delhi Daredevils in the IPL opener at Eden Gardens, Kolkata.

“We’ve got the monkey off our back. Now is the time to go out there and play fearless cricket,” Gambhir said on the eve of the match against Delhi Daredevils.

“Being the defending champions does not add to the pressure, it only gives us some extra confidence. KKR is a very popular team off the cricket field as well.”

Gambhir reiterated the team mantra and said the absence of New Zealand explosive opener Brendon McCullum, nursing a hamstring problem, would not hurt the team’s cause.

“We’ve got a lot of quality in the dressing room. Now is the time to go out there and step up to the opportunity,” he said about McCullum who has been ruled out for KKR’s opening match.

Delhi will miss out on Morne Morkel as the South African is representing his domestic side Titans in the Ram Slam T20 Challenge.

On Morkel, Gambhir said: “We don’t want to talk about how X, Y, Z player would be. We don’t think about particular individuals. We’re playing a game of cricket and it’s a team sport.”

The match would be played on a virgin Eden track which was laid recently and Gambhir hoped it would bring luck for his side.

“We just want to play quality cricket and ensure that all areas are covered. We don’t talk much about the wicket. The surface is newly-laid and we hope it turns out lucky for us and help us start on a winning note,” he said.

Yusuf Pathan had a woeful last season but Gambhir said not just the Baroda all-rounder, everybody in the team need to fire.

“It’s not only him, everyone has to fire. I don’t talk about individuals. It’s a team sport. Let’s talk about the team. It gives maximum pleasure if the team does well,” he explained.

“It was not only [Sunil] Narine, bowlers like Jacques Kallis, [Laxmipathy] Balaji, who was most economical, contributed to the team’s cause. We all are ready for the challenge.”

“He has done a good job so far. We have had three-four practice sessions together. He has played a permanent role. I’m sure as we go along, the team will benefit from his contribution,” Bayliss said.