Birthday boy Gautam Gambhir fell for a lowly 2 in Delhi's round 2 tie against Railways.

Ranji Trophy 2017-18, Round 2, Day 1 threw up quite a few surprises for all to keep interested. Major teams were at display today, namely Mumbai and Gujarat, who are playing their first game the season.

Let us walk through how the Indian players fared on the first day of Round 2.

Sheldon Jackson led from the front for Saurashtra against Jammu and Kashmir. Despite a quick start, thanks to Robin Uthappa, Saurashtra were in spot of bother at 59 for 3. Jackson took charge and lambasted J&K bowlers all around the park.

He reached his 50 in 40 balls, while took merely 31 balls more to record a hundred. He fell for 181 to end a mammoth 281-run partnership with Jadeja.

Ravindra Jadeja played the perfect foil to Jackson s onslaught. Jadeja, known for his high and mighty strokes, rather played a calm innings. He reached his fifty but in 89 balls.

After the fall of Jackson, Jadeja took upon himself to steer Saurashtra s innings. He reached his 100 in 156 balls.

He continued to make merry with the bat and reached his 150th run on 217th ball.

Chetershwar Pujara, who had a decent time in County Cricket, failed with the bat yet again. He scored just 13 runs before getting out to Parvez Rasool.

Robin Uthappa played an attractive of 37 against J&K. His aggressive approach kept the scoreboard ticking for Saurashtra despite fall of wickets from the other end. Ram Dayal brought his innings to an end.

Ravichandran Ashwin’s second outing for Tamil Nadu in the 84th edition of Ranji Trophy was a rather dull one. India’s no.1 Test spinner, Ashwin was ineffective with the ball yet again. He toiled for 24 overs to nab just one wicket.

Yuvraj Singh, returning to the lead Punjab, had a poor outing against Vidarbha. Yuvraj made a 32-ball 20 before falling to Lalit Yadav.

Yusuf Pathan and Irfan Pathan flopped in Baroda s second round tie against Andhra. Yusuf fell for 1, while Irfan could manage a 2-ball duck. 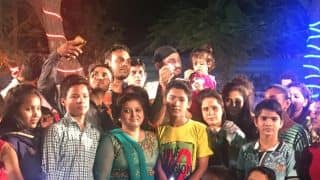 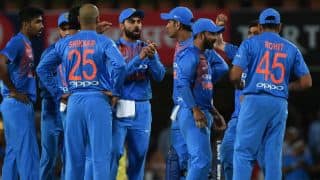