Gautam Gambhir was run out for 67 against Odisha.

New Delhi: Skipper Gautam Gambhir and middle-order batsman Milind Kumar hit patient half-centuries as Delhi beat Odisha by five wickets in a group C encounter of the Vijay Hazare Trophy 2015-16 on Sunday.  Batting first, Odisha scored 225 for nine in 50 overs with Natraj Behera (50) and Biplab Samantray (47) being the only notable run-getters. In reply, Delhi scored the required runs in 46.3 overs. Gambhir started the chase with 67 off 82 balls while Milind completed with an unbeaten 89-ball-62. Left-hander Vaibhav Rawal also chipped in with a brisk 40 off 48 balls. The highlight of Delhi’s chase was a 72-run stand between Milind and Rawal. Full updates: Vijay Hazare Trophy 2015-16, Delhi vs Odisha

While Gambhir’s innings had seven boundaries but the veteran India discard was involved in an useful 59-run stand for the second wicket with Dhruv Shorey (25). Nitish Rana (0) was out cheaply as Delhi were 88 for three at one stage. But Milind’s presence was a calming influence as he added 41 runs with Gambhir for the fourth wicket after which the hme team captain was run-out.

However Rawal-Milind combination carried the team to the doorstep of victory before left-hander Rawal was caught by Rajesh Dhuper off Alok Sahoo’s bowling. Earlier, left-arm spinners Manan Sharma (3 for 47 in 10 overs) and Pawan Negi (2 for 45 in 9 overs) shared five wickets among them in 19 overs giving away only 92 runs as Odisha could not get a sizeable total on board. As a result of this win Delhi get four points. 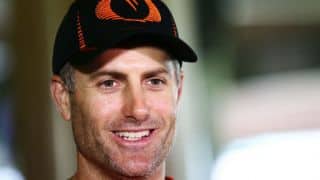