After managing to score just 125, it was a Sunday to forget for Kochi, as Gayle and Dilshan smacked 68 in 22 deliveries to put Bangalore on course for a quick finish. This was RCB s fifth win on the trot, and they now occupy third place on the league table. 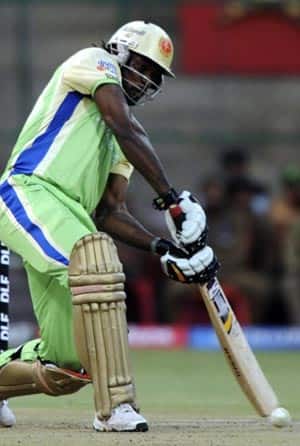 After managing to score just 125, it isn t very heartening to see Chris Gayle and Tillakaratne Dilshan strut out to try and get them. For Mahela Jayawardene and his hapless Kochi Tuskers Kerala, it was a Sunday to forget. Having opted to bat first, they performed limply with the bat and their bowlers were caned to all corners of the M Chinnaswamy Stadium by Gayle and Dilshan, who smacked 68 in 22 deliveries to put Royal Challengers Bangalore on course for a quick finish. This was RCB s fifth win on the trot, and they now occupy third place on the league table.

An enthralling tussle began between the two marauding openers after they came to the middle. It took Gayle just five balls to launch his first six, and then Dilshan teed off. Jayawardene gave the ball to Ramesh Powar whose inclusion today did not go down well with the man benched, Sreesanth and looked on in horror as Dilshan smacked the ball over square leg, mid-on, mid-off and long-on in an over that cost 20.

Not bad, said Gayle, but watch this. Back on strike, he proceeded to bludgeon Prasanth Parameswaran in as audacious an assault as there has been this IPL season. The first two balls the second of which was a no-ball – were sliced over point for six, the third past midwicket for four, the fourth driven off the back foot through cover for four, the fifth clubbed over mid-off for six, and the sixth tonked over the poor bowler s head for maximum. The extra delivery didn t connect with the bat, but still produced four byes past Gayle and the wicketkeeper.

Parameswaran had conceded 37 in six legal deliveries, during which the team fifty came up off 15 balls, and after three overs Gayle s strike rate was a whopping 333.33. RCB had also knocked off more than half the target; to put things in perspective, KTK had accumulated the same amount of runs in the ninth over.

R Vinay Kumar provided some respite when he bowled Gayle for a 16-ball 44, and predictably the run rate dipped from above 20 to a more sedate 14 and gradually slower. Dilshan and Virat Kohli had few hassles in knocking off the required runs, and the win was completed with a whopping 41 deliveries in hand. Gayle had set the tone in murderous manner, and Dilshan finished it off while rounding off a rather unspectacular IPL stint with a half-century.

This was in stark contrast to the way KTK had batted. After a solid foundation by their openers, the visitors were unable to fashion partnerships, and having slipped from 64 for one to 89 for five they lacked the firepower to post a recovery. Tellingly, there were just 12 fours, no sixes and 50 dot balls in KTK s innings and the highest stand was the 43 that the openers put on before the malaise set in.

The first four overs of pace produced 29 runs, with Michael Klinger keen to use his feet to drive down the ground or work it off his pads. Twelve came from Gayle s first over, the fifth over the innings, as Brendon McCullum too advanced well and collected firmly struck boundaries.

The breakthrough came in the sixth over, bowled by Daniel Vettori, when McCullum charged out and top-edged a big swipe to short third man for 22. Gayle s return to bowl the ninth over then brought about Klinger s downfall, yorked when coming down the track, and RCB were in good spirits as they entered the first strategic break.

A double-strike followed. First Vettori tempted Jayawardene into nicking a teasing delivery that spun away and then AB Villiers collected a wide throw from short third man, released the ball one-handed while airborne and hit the stumps horizontal to the ground. Parthiv Patel, who had hesitated after Brad Hodge steered the ball to Mohammad Kaif, was the man to be sent on his way as he was deemed to be closer to the nonstriker s end.

From a good position, KTK had slipped to an ordinary one which soon became a poor one. In the end, they were way too short on runs.