The weather and Royal Challengers Bangalore got the better of Kolkata Knight Riders on a wet day in Bangalore, with the visitors short-changed by the forces of nature and then ending up on the wrong side of a close encounter. 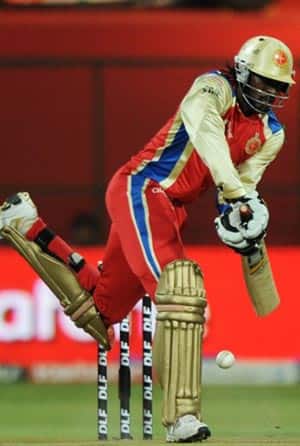 The weather and Royal Challengers Bangalore got the better of Kolkata Knight Riders on a wet day in Bangalore, with the visitors short-changed by the forces of nature and then ending up on the wrong side of a close encounter.

RCB s rain-affected win, which made them the first team to enter the play-offs, was set up in the field, when either side of a lengthy delay they did well to curb KKR s big bats, and allowed the visitors to score just 89 in 13 allotted overs. Set a revised target of 102, RCB stumbled after Chris Gayle had larruped 38 in 12 balls but managed to win with three deliveries remaining. They now sit on top of the points table, having strung together a record seven consecutive wins, though potentially not for long should Mumbai Indians beat Deccan Chargers tonight.

RCB s bowlers exploited the helpful conditions early on to prize out three wickets inside the Powerplay. Eoin Morgan was forced to innovate and managed to pick out square leg off Zaheer Khan, while Charl Langeveldt s use of the bouncer did for Jacques Kallis.

Zaheer, moving the ball adeptly and pinging it in short, gave Gautam Gambhir a brief work out and that resulted in Gambhir throwing his bat at the first bit of width he saw. Unfortunately for him, he picked out AB de Villiers at point to give Sreenath Aravind a wicket off his third delivery. KKR were in shambles at 30 for three.

Yusuf Pathan, reprieved when Aravind failed to clasp a full-blooded drive, slammed two sixes before the rain arrived. Upon resumption, with only two overs to go, he struck Virat Kohli for a third six. However, his dismissal to a full toss in the final over, bowled by the impressive Langeveldt, allowed RCB to finish the inning on a good note.

In the opening over of RCB s reply, the 16 scored by Gayle off Brett Lee was more than any over in the KKR innings. The first two deliveries were slashed square on the off side for four, the third was a superb yorker equally well played by Gayle, the fourth was a top edge for four more, and the fifth was driven into the covers for another boundary.

Luke Pomersbach, replacing Tillakaratne Dilshan, slapped his first ball for four and then wisely got Gayle on strike. With two thumped sixes, Gayle soared into the top place for runs scored in IPL 2011, and the over was rounded off with another forceful slash over the off side for four. In two overs RCB were 39 without loss, 34 of those in 10 balls to Gayle.

Lee got his man after conceding one more boundary, as Kallis did very well to judge another top edge. Kallis was again in the thick of things with the ball, having Pomersbach picked up at mid-off and inducing an outer edge off Virat Kohli s bat with a gem of a delivery. Attack was the only forward for KKR given how well RCB had the asking rate in control. Even the dismissals of Mohammad Kaif and Arun Karthik – both pulling to deep midwicket – and a direct hit from Gambhir to run-out a hobbling Saurabh Tiwary weren t enough to pull KKR over the line.