Boycott feels that England have turned it all around in style after the disaster at Lord’s.

Former captain Geoffrey Boycott is mighty pleased with England winning the Manchester Test by an innings and inside three days but he sounded a word of caution saying that Alastair Cook and Co. must improve upon three areas before they face India in the series-decider fifth Test starting Aug 15 at The Oval.

Lauding the terrific performance at the Old Trafford, where nearly two sessions were wiped out due to rain, Boycott feels that England have turned it all around in style after the disaster at Lord’s.

“Although we want to enjoy the team’s success and believe England have turned the corner we should sound a note of caution because there are three areas they need to improve. They have to look at the quality of their back-up seam bowlers, address the weaknesses of opening batsman Sam Robson and all our batsmen have to improve against the short ball,” Boycott wrote in his column in The Daily Telegraph.

The 73-year-old Yorkshireman has full confidence in England fast bowlers James Anderson and Stuart Broad but is not impressed with the back-up seamers Chris Woakes and Chris Jordan, who he feels are not cut out for Test cricket.

“I know David Saker, the England bowling coach, swears by Woakes. But for me Ben Stokes has far more talent and it is up to good coaches to manage that ability and help him with his attitude. Attitude is no substitute for talent… Ability gets you wickets, not being a nice lad,” he said.

Boycott also raised questions on Robson’s place in the team. “His judgement on what to play and what to leave around off stump is suspect. He gets out caught in the slip cordon or playing no stroke. The better the new ball bowler, the more balls he will put in the corridor of uncertainty at pace,” said Boycott.

Boycott also pointed to England batsmen’s frailties in playing the short-pitched deliveries that also led to their loss in the Lord’s Test. “My final point is this. Broad hooking and getting smashed on the nose highlighted the whole team’s problem against the short ball. Even before he got hit he pulled the two previous balls for six but was not in control of either shot.

“A number of our players have a big problem and will not accept it. Moeen Ali does not know whether to hook or duck and turns his head away and hopes for the best. Alastair Cook hooked it down fine leg’s throat at Old Trafford. He is a back foot player and makes most of his runs that way. He is always looking to cut and pull and it is compulsive, he can’t seem to stop himself. Joe Root got hit on the helmet when Varun Aaron went around the wicket.

“Even Ian Bell, who played beautifully, had a waft at his first ball, which was short, wide and fast. At Lord’s three of the side got out hooking: Ben Stokes on a pair, Matt Prior hooked to long leg and Root went the same way,” he said. Boycott wondered that if the English batsmen struggle while playing the short-pitched deliveries sent by the Indian bowlers, how would they face Australian tearaway Mitchell Johnson in the Ashes next year. 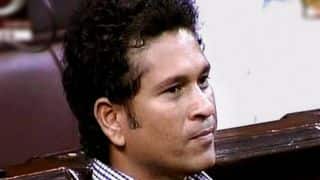 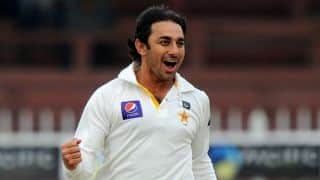