After the thrilling third ODI, George Bailey feels these are the kind of games Australia will have to be ready for during World Cup.

Australia skipper George Bailey praised his team after the 3-0 whitewash over Pakistan. Bailey was happy that the team emerged victorious in the thrilling third and final One-Day International (ODI) as these are the kind of games he felt the team could face in the ICC World Cup 2015.

“The most pleasing thing from my part was that we had to battle in every game. Not everything went our way and there wasn’t scores of over 300. To see our energy and our fight and our intent to get through difficult periods and get through the pressure that Pakistan were putting on, and throw it back at them – that was more pleasing,” Bailey was quoted as saying the official website of Cricket Australia.

“That’s the sort of stuff that will happen in World Cups. Games will come to the crunch point and you’ll have to absorb that pressure and stand up and guys will have to deliver match-winning performances. The more you can do it, the more you can find ways to win games like we did tonight, the better that holds you down the road,” he added.

Australia managed to edge out Pakistan by one run in the third ODI at Abu Dhabi. Pakistan were well on course for a win when they committed a harakiri and despite needing just two off the last over failed to knock even a run in the over.

Despite the clinical performance in the three matches, Bailey still saw some scope for improvement. “Coming to crunch times, we’re not quite nailing our partnerships. Nearly every game we’ve had some nice partnerships, we’ve had 70s and 80s, we haven’t ticked off a really big hundred partnership,” said Bailey.

“Generally we’ve had someone who’s provided the backbone of the innings, particularly through the middle overs, which can be challenging over here. As I said, guys have just got to absorb that pressure and build into the innings,” he concluded. Pakistan, West Indies and New Zealand are the worst chasers in ODIs since 2010 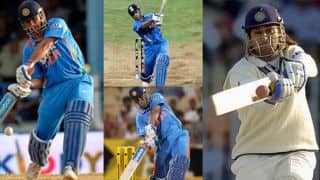