Australian bowlers were smashed all over the park by Indian batsmen, especially Virat Kohli, but visiting captain George Bailey said he is not disappointed by their performance as they stuck to the team's plan in the lost sixth One-Day International (ODI) in Nagpur. 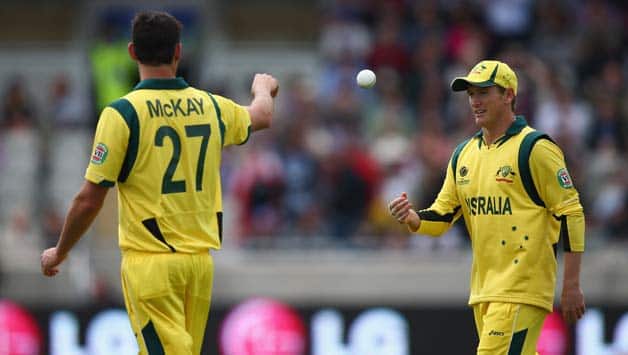 Australian bowlers were smashed all over the park by Indian batsmen, especially Virat Kohli, but visiting captain George Bailey said he is not disappointed by their performance as they stuck to the team’s plan in the lost sixth One-Day International (ODI) in Nagpur.

The result has left the seven-match series tied at 2-2 with the final ODI set to be the decisive one.

“I think we bowled better than in Jaipur. I thought we had much better plans in Nagpur. I could really see what the bowlers were trying to do. We stuck at it really well. I’m certainly not disappointed with the bowlers tonight,” Bailey told reporters on Wednesday.

“I thought we tried really hard. And how close? It’s getting down to three balls at the end there. You’re talking minuscule differences in the game,” he said.

Kohli carted the Australian bowlers around in a whirlwind knock which included 18 fours and a six. Bailey said his bowlers need to figure out a way to get Kohli out.

“I’d like to find a way to get Virat Kohli out. That’s probably my first thought. I don’t think we should read too much into 360 and 350. It’s quite clear that given the two new balls and the four fielders out, that maybe the new 300-290.

“We’re disappointed not to win. But we’re not making too much of the score,” he said.

“To our bowlers’ credit, I think we tried to make Virat hit really good shots. Particularly towards the end we made him hit good balls for fours and sixes. I was really proud of the way our bowlers finished,” added the Tasmanian.

Bailey said the series has been particularly hard for the bowlers and the difference between victory and defeat has been minuscule.

“Both teams are looking for a difference with the bowling attack. It’s been so hard for bowlers, it’s just about trying to find two per cent difference that could be the difference in the game,” he said.

He was full of praise for Watson, who was reprieved after being caught off a no ball bowled by Ravindra Jadeja.

“He batted beautifully. There was a nice little reprieve with the no ball, which was handy. He just puts so much pressure back on the bowlers, especially the spinners. He takes the focus of them bowling well to just bowling to survive. It’s great to see,” said the Australian captain.

“I think we’re still playing really good cricket, but India deserve to be the No 1 team in the world. They’re a very, very good one-day side. We know that and we know we have to play at our absolute best. We saw tonight (Wednesday) that we need more than 11 guys, performing well.

“The one thing we’ll take out as a real positive is every time the series has been even so far we’ve managed to win that game. As far as a spectacle goes I guess it deserves to come down to the final game,” he said.

Bailey rejected suggestions that the Indian bowling attack is the worst in the world.

“Absolutely not, I think you’re making way too much of it. The wickets have been beautiful batting wickets. The game has changed a little bit. We saw the other day if there’s a little bit of bounce and seam, then India’s bowlers are good.

“They are good swing bowlers, good seam bowlers. It’s the same with us,” he said.