George Bailey on Sunday said he is ready to resume his place in the middle-order following the retirement of Michael Clarke.

Melbourne: Australia batsman George Bailey on Sunday said he is ready to resume his place in the middle-order following the retirement of Michael Clarke. But he added he’s not expecting captaincy on a permanent basis. The Tasmanian has led Australia’s One-Day International (ODI) side more than anybody else over the past two years. The 32-year-old also led his country in their ICC Cricket World Cup 2015 opening fixture against England on February 14, scoring an important 55 with the bat as Australia won by 111 runs. Michael Clarke bows out in style, emulates Imran Khan at ICC Cricket World Cup 2015

“If I wasn’t in the team for this last six weeks, then I can’t imagine I would be skipper. I would love to remain a part of the team,” Bailey was quoted as saying by Cricket Australia (CA). “I certainly feel like I’ve got a number of good years of cricket left in me and hopefully a number of them are in Australian colours.” Overall, 29 of Bailey’s 57 ODIs have come as captain with a winning percentage of 55. Former Australia batsman Michael Hussey said the choice between Bailey and Steve Smith comes down to whether selectors want a ready-made replacement or a man for the future. India take three spots in top 10 batsmen; Starc top bowler, Villiers top batsman

“George Bailey’s done a fantastic job over a fair period of time now. You probably don’t have to look any further than that at the moment. I’m sure it’s something they’ll discuss, the long-term future of the one-day team,” Hussey said. Hussey said for long-term basis, Smith’s name might come up for captain’s role. “George has done a fantastic job but if they’re looking long-term, a lot longer term, Steve Smith’s name might pop up. While the captaincy is up for debate, Bailey would be one of the leading candidates to replace Clarke in Australia’s middle order,” ” said the southpaw.  Battered, bruised but not beaten, Clarke wins hearts with ICC World Cup 2015 triumph 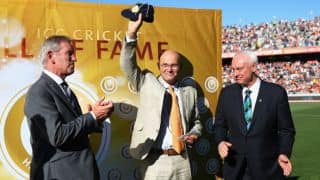