Kevin Pietersen has figured out a way to tackle India's menacing pacer Jasprit Bumrah, albeit only for the right-handed batsmen.

Former England batsman Kevin Pietersen has figured out a way to tackle India’s menacing pacer Jasprit Bumrah, albeit only for the right-handed batsmen.

Bumrah, who ranks at the top of the ICC ranking, produced a fiery spell of fast bowling to put South Africa on the back foot with a two-wicket haul in the World Cup on Wednesday.

“Quick memo to all right handed batters – get onto off stump against Bumrah and look to hit him from, straight back at the stumps to square leg. Eliminate the off side completely!” Pietersen wrote on his twitter handle.

Bumrah’s two for 35, along with Yuzvendra Chahal’s four for 51, saw India restrict the Proteas to 227 for nine, a target Virat Kohli and his men chased down with six wickets in hand.

The 25-year-old from Ahmedabad is considered one of the best death bowlers, having snapped 44 wickets in the slog overs. Overall, he has taken 87 wickets in 50 matches at an average of 22.0.

India will next meet Australia on June 6. 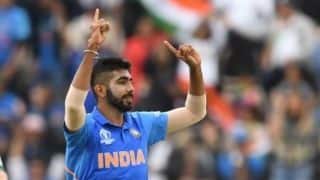