Maxwell is expected to set the stage on fire in this years' IPL.

Australian all-rounder Glenn Maxwell rubbished any talk of Twenty20 (T20I) cricket killing the game and put a positive spin on the much maligned abridged version of the game, stating that the big bucks going around in T20 cricket has inspired more kids to dream about making a living out of cricket.

After grabbing the headlines in last year’s Indian Premier League (IPL) for the astronomical fees that Mumbai Indians paid to secure his signature, ‘The Big Show’ was one of the big money signings in this year’s IPL as well with Kings XI Punjab signing the Victorian for yet another seven-figure contract.

Maxwell said, “I think it sends a good message to kids as far as telling them that they can make a career at cricket,” Maxwell said.

“Kids see that there are millions of opportunities in AFL, but only 11 in cricket. Now they know that they can earn that kind of money in a couple of weeks and maybe that starts them playing.

Maxwell pointed out that the T20 cricket could be the doorway to Test cricket in the longer format, suggesting that each format helps the other out and helps the game overall.

“They might end up in the longer format, they might enjoy cricket that way, but what it’s doing is getting kids involved.”

Maxwell was also in the news recently for a couple of blitzkrieg knocks in the Sheffield Shield when wickets were falling like nine pins around him. His home side Victoria now lies at the bottom of the Shield despite Maxwell’s tally of 221 runs from just two innings, Maxwell said, “It was a pretty disappointing match all-round to tell you the truth. To get that many runs and have no impact on the game is pretty frustrating for the whole team”.

The big-hitting all-rounder blamed the distraction caused by the Big Bash and the consequence of shuttling across formats for the reason behind Victoria’s flagging fortunes, “We’ve been jumping from format to format. We’ve had an unsettled side for a while with guys going to T20, one day cricket and in and out of the Australian teams,” he explains. “We haven’t had a consistent group all year.”

However Maxwell went on to say that modern day players should adapt across formats and that budding players need not look beyond New Zealand captain Brendon McCullum, who just posted the first triple-century by a kiwi batsman and the Australian couldn’t stop raving about the determination and resilience of McCullum, “The fact that someone can face 580 balls and still have the concentration to keep going; that’s amazing,” Maxwell said. “Test cricket hasn’t taken away his natural flair, but he harnesses it a lot better than most players. He’s a big one that I can look up to and hopefully follow in his footsteps.”

The first major hurdle to that road to reach those lofty heights that Test matches demand is the Bushrangers’ Sheffield Shield clash against South Australia, who are sitting pretty at the top of the table, at the Adelaide Oval, starting on Thursday.

Later in the month, Maxwell’s will leave to South Africa ahead of three T20Is and will hope that his ability to clear the boundary with ease will help bring Australia the ICC WorldT20 2014. 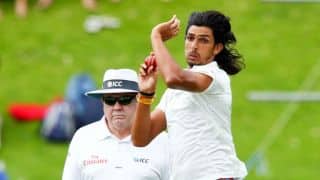