Mumbai Indians made a fine comeback in IPL 2014.

Kings XI Punjab were sent into bat by Mumbai Indians in Indian Premier League (IPL) 2014. It was Virdender Sehwag who opened the shoulders for Punjab with some fine shots on the up, before he was run out. Manan Vohra then took over by playing a few eye-catching shots. Shaun Marsh, the left-hander too was able to time the ball with utmost ease.

However just at the right time for Mumbai, Marsh lost his wicket to Krishmar Santokie’s medium pacer. It was their star batsman, Glenn Maxwell who came into bat at No 4 position. Punjab also picked up the wicket of Vohra who was cleaned up by Gopal. Even Maxwell lost the plot as he was snared by Gopal. It was a soft dismissal from him as he was caught and bowled.

Earlier, Praveen Kumar began proceedings for Punjab. The first delivery was wide and cut through point for a four by Sehwag. The second delivery was struck for a six over long-off on the front-foot. Krishmar Santokie shared the new ball with Praveen.

Catch Live Blog of the match 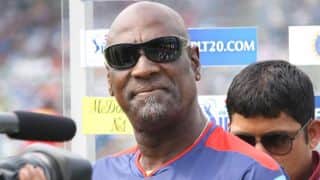