Glenn Maxwell: Hopeful to take my game to another level

Glenn Maxwell: Hopeful to take my game to another level

Glenn Maxwell became the first Australian to slam two T20I hundreds after his whirlwind knock versus England on Wednesday.

A lot has been said and spoken about Glenn Maxwell in recent past. After facing the brunt of Australian selectors and skipper Steven Smith’s criticism on his ‘training methods’, Maxwell has turned the tides in his favour since his comeback in the ongoing Trans-Tasman T20I tri-series. Maxwell, in the second match versus England, registered a match-winning knock and became the first Australian with 2 hundreds in the shortest format. Cricbuzz reported that he doesn’t wish to relax at this stage but wants to consolidate his rich form instead. He wants to take his game to “another level.”

Australia are scheduled to tour England in mid-2018 for what will definitely be World Cup preparations. Maxwell is eyeing a long run in the playing XI, and wants to see himself in the team bus in UK: “It depends how I’m playing at that time (ahead of England tour). If I continue this form, I’d love to be on that plane and obviously if I do get selected, hopefully, I’m in similar form and can carry that on,” told Maxwell. He added, “This has been my best summer, obviously for output of runs and consistency 590 runs at 73.75 and 299 runs at 37 in Big Bash 2017-18. There’s still a few years left in my career so hopefully I can take it to another level.”

Much was written on the Smith-Maxwell cold war due to the former’s jibe on Maxwell. Maxwell brushed all rumours aside, and stated they communicated in that aspect: “As a No. 6, it’s an awkward thing to prepare for. You go in with about 15 or 16 different scenarios. If your team’s 4 for 50, you’ve got to make sure you’re knuckling down and batting for a long period of time. If you’re 4 for 250 and you’re coming in with five overs left, you’ve got to go from ball one. That was more what he was talking about and when I sat down with him, we had a good conversation about that.” 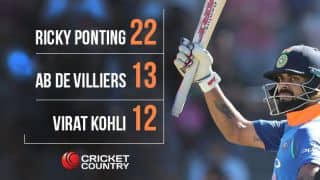