The all-rounder had an open discussion with the selectors last week regarding his axing from the last two ODIs.

Glenn Maxwell s form has become the talk of the town. Recently, his good friend Aaron Finch came out in support of the all-rounder. Maxwell, who had a decent start in the ODI series against India, lost his rhythm in the following matches. He was later dropped from the last two ODIs. However, Maxwell continued to practice in the nets and also helped the youngsters during the ODIs despite being away from the XI. Now, the all-rounder is expecting a form reversal that could turn around his fortunes ahead of the Ashes 2017-18. The all-rounder had an open discussion with the selectors last week regarding his axing from the last two ODIs.

Maxwell is hopeful this summer proves to be fruitful for him with some breakthrough performance in the JLT Sheffield Shield matches, starting later this month. Coach Darren Lehmann has indicated the No. 6 and 7 positions are up for grabs. The player who performs the best in Shield will earn it. Without a half-century in 27 innings across formats, Maxwell s future lies on these Shield match.

They’ve made it pretty clear that whoever performs well in the three Shield games will put their name up and get the opportunity. I’d like to get the opportunity if I do play well in those three Shield games. To play in the Ashes would be an absolute dream. I’ve obviously been a little bit short of runs. I’ve been hitting the ball sort of how I’d like to, but I just seem to keep getting out at strange times and in different ways. I wouldn’t say I’m short of confidence. I think the pressure on you amplifies a little bit to get more runs (when you re out of form), Maxwell told cricket.com.au.

Marcus Stoinis and Hilton Cartwright are also in contention for Ashes call-up. With the all-rounder position at stake, several budding cricketers are making the most of their opportunity.

But Maxwell is least concerned about the pressure and social media debates, I haven’t really been paying too much attention to it, to be honest. I’ve been a bit mute on social media recently. I’ve just been concentrating on trying to play good cricket for my country. Hopefully there are runs around the corner and some success around the corner.

Maxwell also revealed his chat with the selectors and took into consideration their opinion, We had a good chat in Nagpur and they were really fair to me, which was good. They said I needed more runs and I understood that. My role in the team is probably more of batter these days and I need to make more runs and I wasn’t doing that. And I was duly dropped.

The only hope that Maxwell is pinned to at the moment is the second T20I at Guwahati where the all-rounder can bring his skills to fore. 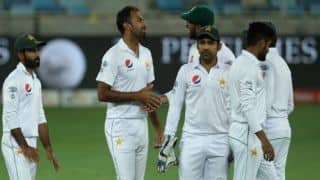