Glenn Maxwell is not going to step down from his remarks against the Indian batsmen he made earlier in the series.

Glenn Maxwell is not going to step down from his remarks against the Indian batsmen, as he has now compared them with himself the other Australian cricketers such as David Warner. Maxwell had earlier ignited controversy of sorts when he claimed that Indian batsmen are milestone-driven, and they tend to slow down with their scoring when they are into their 90s. Maxwell had said this after his match-winning 96 at Melbourne, which sealed the five-match series 3-0 in the favour of Australia. Indian captain MS Dhoni had later on defended his batsmen, asking everyone who had doubts to check statistics. Full Cricket Scorecard: India vs Australia 2015-16, 5th ODI at Sydney

Maxwell was quoted as saying by The Hindu, “I knew it (my earlier remark) was going to blow up. It didn’t really bother me. I was sent a photo the other day, it said: Virat (in Canberra) was 84 off 63 [61], and then 100 off 89 [84], or something like that. He got his last 11 runs off 22 balls [21] to get to his hundred. I thought about that and I was like, ‘Jeez he did it so easily all the way up until then, and then you just lose a bit of momentum’.” ALSO READ: Glenn Maxwell fitness to be assessed before fifth ODI

“Then you look, on the other hand, when you watch David Warner get into the nineties and try to slog sweep Ishant Sharma for six. It’s just, to me, that’s two complete different ends of the spectrum. And then you look at the scoreline and you see 4-0. And I’d much rather be 4-0 basically,” Maxwell added. ALSO READ: India cricket team’s training session at Sydney cancelled due to wet conditions

Maxwell’s words can be taken as an intentional attempt to unsettle the Indian batsmen, with their top-order making merry against an inexperienced Australian bowling line-up in their backyard. Rohit Sharma and Virat Kohli have struck two centuries each in four matches, while Shikhar Dhawan also scored a ton in the fourth match at Canberra. 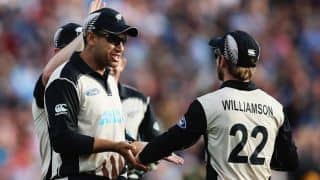