Glenn Maxwell‘s third blitzkrieg in-a-row with yet another 95, propelled Kings XI Punjab (KXIP) to 193 for six in the Match 9 of the Indian Premier League (IPL) 2014 against Sunrisers Hyderabad. Maxwell struck five fours and nine sixes in his amazing knock. Bhuvneshwar Kumar was the pick of the bowlers as he took three wickets. This is the first time Punjab have batted first in IPL 7.

Despite things not quite working out in the previous match, Punjab persisted with Virender Sehwag and Cheteshwar Pujara to see off the powerplay overs. Irfan Pathan’s third over started steadily but Sehwag turned back the the clock with a four and a six of the leg-side and a four down the ground of Pathan. Pujara soon got in on the act and it was Dale Steyn of all bowlers that the Indian number three decided to go after.

Sehwag yet again, turned back clock to smash a ball that was tossed up to middle stump to smack the ball over Dale Steyn at long on for a six. Sehwag yet again tried the same shot but didn’t time it properly; the ball landed kindly to Darren Sammy’s palms at long-off and the former Indian opener perished to the pavilion. Hyderabad shot themselves in the foot twice in an over. Glenn Maxwell had decided to launch one into the stands and the usually brilliant David Warner dropped an absolute sitter at long-off. Oh boy, would that go on to cost them.The next event was far more comical as Darren Sammy got into a good position at long-on to pouch Pujara’s lofted shot but at the last second the West Indian decided to withdraw from catching the ball and it ended up being a boundary for Punjab.

In an attempt to get a m0ve on with the scoring rate, Pujara decided to up the ante and caressed a ball through backward point for a boundary. The next delivery of Sammy was a slower one and Pujara’s hoick over deep-mid wicket was caught by Venugopal Rao. Amit Mishra had a hard taste of reality bowling to a different octGlenn Maxwell and the ‘Big Show’ smacked a huge six over deep mid-wicket. The second delivery went in the same direction and just cleared the boundary. The mid-wicket spectators were under the cosh again with another six in their direction. A single was hit of the next ball but David Miller, almost in an attempt to compete with Maxwell smacked one over long on. 25 runs came of the over and Shikhar Dhawan and his men were looking at the skies for answers.

It was Karn Sharma’s turn to for some Maxwell treatment and a huge six bought up yet another half-century. The onslaught continued with a another boundary over deep cover and Maxwell’s typical reverse-sweep came out in the final ball to score another boundary. More drama happened when Maxwell was out in the deep but after referring, Darren Sammy was guilty of overstepping and the show continued.

Miller was eating up and deliveries and was under pressure after his scintillating match-winning knock in the last game. The impressive Bhuvaneshwar finally ended the partnership when Warner’s horror show on the field finally ended when he grasped the mistimed loft at long-on. Nothing deterred Maxwell though and Mishra was the victim again. There was one six down the ground and a full blooded heave saw the ball land in the streets of Sharjah. It was salvation for Hyderabad after Maxwell couldn’t find the elevation and Sammy made no mistake this time. Punjab were trying to get past the 20o mark and skipper George Bailey only found Warner’s hands in the deep and the Bhuvaneshwar finished nicely with Mitchell Johnson’s wicket of the last ball. 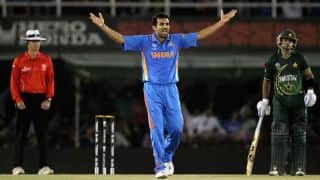