Glen Maxwell took 185 balls to reach 104, and this was the first time Maxwell faced over 100 balls in any format.

Australia opener David Warner believes that Glenn Maxwell‘s maiden century in the third Test against India at Ranchi should make the all-rounder believe that he can perform in the longest format with conviction. Maxwell struck a fine 104 and put up 191 runs for the fifth wicket with his skipper Steven Smith in the first innings. Maxwell took 185 balls to reach 104, and this was the first time Maxwell faced over 100 balls in any format. India responded well in the second innings, thanks to Cheteshwar Pujara s 202 and Wriddhiman Saha s 117. The four-match Border-Gavaskar Trophy series is level at 1-1, with the final Test scheduled to be played from Saturday at Dharamsala. Full Cricket Scorecard: India vs Australia 3rd Test at Ranchi

“For Maxi it’s about just doing the basics right, Warner said, according to cricket.com.au. Keep doing what he does best at training. The hundred he scored was fantastic and phenomenal and a great boost for him. I think you look at the Twenty20 in Sri Lanka [last year], when he scored the 100 there, I think he’s got it in his head that he knows he’s got the capacity to do that, to take games away from teams, he added.

“To come out here and fight like he did and bat time, it should say to him he can play this format. And looking forward and down the future, hopefully he can keep playing [Test cricket] for a long time.” READ: India vs Australia 3rd Test: Glenn Maxwell under fire for mocking Virat Kohli

Maxwell, after his innings, said that he now hoped to be consistent. “Hopefully it just ticks something inside that I can continue to be consistent,” Maxwell said after day three in Ranchi. That s always been the biggest thing the coaches, selectors have always wanted is consistency. If I can keep producing long innings … batting long periods of time and building partnerships with other players, that s going to go a long way to firstly holding my spot but secondly winning games for Australia.” 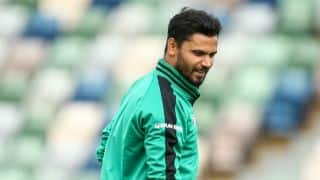