He was disappointed the way things actually turned out to be in the Ashes 2015.

Glenn McGrath was shocked to see a tight-packed security made for Sachin Tendulkar, who visited his MRF Pace Foundation academy in Chennai on Friday. He also wondered on why such arrangeemnts ere not made for him. Although he had predicted a 5-0 clean sweep for Australia in the ongoing Ashes, he was disappointed the way things actually turned out to be. “Disappointed with the way the Ashes panned out. They didn’t adapt well to English conditions. Batsmen were hard on the ball. Our bowlers didn’t hit right areas. They have begun the last Test well and I’m sure they’ll do better and wind up the series with a win,” he said, reports The New Indian Express. Michael Clarke enforces follow-on for first time in career as captain; England trail by 332 runs in 5th Test

Mcgrath also had all praise for retiring Australian skipper, Michael Clarke for a brilliant career. “Clarke had a brilliant career. Of late he has been on and off the side due to injuries. His form too has been on and off. Though retirement is a player’s call, I think he did the right thing once he believed his time was up. It was a wise call,” said the Aussie legend. England bowled out for 149, will follow-on, on third day of 5th Ashes Test at The Oval

He was also not much in favour of using five bowlers just for the sake of using it, as he feels it is yet to be tested properly and ensure success, which India are currently using. “We had four bowlers and two batsmen who were sort of all-rounders. To me the five-bowler theory will work if the fifth one is an all-rounder. If you have five bowlers only, then the batsmen have to work hard, otherwise it’ll be difficult. You can have three fast bowlers, a spinner and a batting all-rounder. That’s what I would like,” he said. McGrath attributes Australia’s away Ashes defeat to monotony in nature of Australian pitches

He had all-praise for young Indian fast-bowler, Varun Aaron and said he well possessed the ability to become a match-winningh bowler. “He has great potential and good pace. He can swing the new ball and has good reverse swing. He has got everything needed to be effective. If he works harder and becomes accurate without sacrificing pace, he’ll be a better bowler. He has the work ethic to do that. If team management and captain use him judiciously, he’ll be more successful,” he said. The Oval to turn blue for Cricket United charity on Day 3 of 5th Test

Speaking on Virat Kohli‘s attitude to play aggressive and fearless cricket, he said, “It can happen to any team. There have been occasions when teams failed to make 120. In the fourth innings when the wicket is turning square, if you lose a couple of wickets, pressure builds and you cave in. True character of the captain and team is in bouncing back.” Peter Siddle should have been in Australia Ashes team for 4th Test, says Glenn McGrath 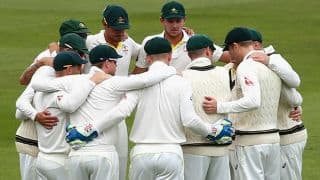