"Skill and techniques are important and attitude takes you to rest of the way."

Chennai: Australian pace legend Glenn McGrath feels that he has “learnt a lot” after being associated with MRF Pace foundation in the last two years after his initial hesitation to take over the role from Dennis Lillee. “To take over from Dennis [Lillee], I was a little bit hesitant. Dennis told me to come and work with him here for two weeks. Obviously, I was impressed with the coaching staff and then decided in favour of it. Since then, it has been a learning experience for me as well,” McGrath told media persons sitting alongside Sachin Tendulkar at Chennai, on Friday.

“So much aspect about the technical aspect of the fast bowling I can now identify issues the young bowlers have and help them improved and make them more efficient and teach them how to refrain from getting injured,” McGrath added. The highest wicket-taker in Test cricket amongst pacers also feels that during his formative years, he never went through such a systematic grind.”

“If I had known them when I was playing as to what I know now, I could have fixed my action up and bowled a bit better. I have really enjoyed being here for three years,” said the ‘Pigeon’. McGrath said that “skill and technique” can take a talented bowler till a certain level but it is the “attitude” that determines one’s success at the highest level.

“Skill and techniques are important and attitude takes you to rest of the way. It is about combination of skill, work ethics and if you achieve these there is no stopping you. Sachin and myself have been lucky to play at top level and it is something unique that we are able to pass on our works to pretty young guys coming through. Quite a few Indian bowlers have gone through the MRF Pace Foundation and played for India have 2200 Test wickets between them is incredible. I was thinking today that making it one more and we should be adding to the list is Sachin stand up to become a fast bowler in 1987-88,” he said.

McGrath said that he has enjoyed working with the next crop of Indian pacers and focussed on the mental aspect of preparation. “Hopefully, they are playing well and playing at state levels and doing well. But they have not made the next step to play international cricket for India. Working with them on mental side of the game, the preparation and thought process as to how they go about taking wickets and building pressure. That is what we decided to and probably BCCI, which I think is a great partnership and it is huge credit to the MRF.

“Young bowlers come from other countries too. For MRF to get that recognition is an amazing and also working with BCCI to produce quality fast bowlers for India is as hard as it gets. In Australia, you have the pace and bounce and other countries around the world. But in India you need to look at ways to take wickets,” McGrath signed off. 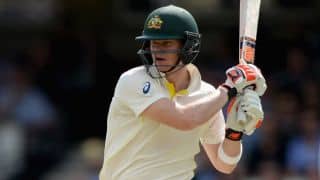