Australia legend Glenn McGrath says it was good to see a crop of quality pacemen emerging from India, which has generally relied on slower bowlers.

Chennai: Australia legend Glenn McGrath says it was good to see a crop of quality pacemen emerging from India, which has generally relied on slower bowlers. “To see so many fast bowlers come through (from India) is wonderful. To be a fast bowler in India is the toughest job in the world. The wickets here are conducive to spin and batting. One has to really work hard as a bowler, especially a paceman. To see (many) people bowling at 140 kph-plus, high 140s (kph) is promising,” he told PTI in an interaction. The 47-year-old former Australian pacer, who is director of the MRF Pace Foundation, is in the city to interact with the trainees. READ: India have got one of the most potent bowling attacks, feels Glenn McGrath

McGrath said the emergence of fast bowlers like Umesh Yadav, Jasprit Bumrah, Bhuvneshwar Kumar augurs well for India. “They are going well. Umesh (Yadav) is doing exceptionally well at the moment, bowling at a good pace and picking up wickets too. (Bhuvneshwar) Kumar knows his game pretty well, gets it in the right areas; swings it at a recent pace. Jasprit Bumrah, we have done a little bit of work with him, has a unique action and is a unique bowler. He has done well in the shorter versions of the game, the T20s and ODIs and bowls at the death. He is very intelligent with the way he bowls at the death. I have been impressed and he can get better. The Indian team’s bowlers are looking very good,” said McGrath, who took 563 wickets in 124 Tests and 381 scalps in 250 ODIs.

He also felt that Bumrah, who was part of the victorious Mumbai Indians team in IPL-10, could do well in Test matches if given an opportunity.

“Of course, he can. I think he bowls yorkers really well. He has got a good slower ball. Those things are good for the shorter version of the game. With the longer version it is just about building pressure and having good control. If you are successful in one form of the game, you can transfer that to the other. He is good enough,” McGrath said.

About Varun Aaron, a MRF Pace Foundation product, the Australian said, “He bowls at a good pace. Can bowl 150 kph- plus. When he gets it right, he bowls attacking lengths and can swing it away from the right-handers. Just been one of those things that he has fallen behind in the pecking order. If he gets a few games and does well, he can be back.”

Expressing happiness that there were numerous quality pacemen going around at present, he picked compatriot Mitchell Starc as the best in the business.

“When he is on song, it is Starc. When he is swinging the new ball at around 150-155 kph, bowling attacking lengths, he is lethal,” McGrath said.

McGrath said Starc can be equally good with the old ball, getting it to reverse at some speed.

“Every team has quality bowlers there is no doubt about that. We spoke about Indian bowlers. Pakistan always produces good bowlers. South Africa with Kagiso Rabada and Morne Morkel. There are plenty of quality pacemen going around,” he said.

Having completed five years at the Pace Foundation, he said, “Time had flown so fast and it has been a memorable journey. Chennai is now second home for me. I feel happy to see many of the boys come through. Some of them are performing well. Look at Basil Thampi, who won the emerging player award in the recent IPL. Hopefully, I have added some of my experience to the boys. I have also learnt a lot myself, probably on the technical side,” McGrath said.

McGrath had a word of praise for the Foundation’s trainees – Tamil Nadu’s Aswin Crist, who picked up over 35 wickets in the 2016-17 Ranji Trophy season and K Vignesh.

“Crist has learned a lot in the last two seasons, picked up wickets and will become a better bowler with experience.”

Along with head coach M Senthilnathan, he picked out a few others including Aniket Chowdhry, Ankit Rajput, Nathu Singh, Avesh Khan, Veer Pratap and Sandeep Warrier, apart from Thampi, who were good prospects for the future.

Asked why fast bowlers tend to get injured a lot more these days, McGrath, who had a injury-free career, said, “I think it is slightly different these days, different intensity with T20 cricket as well. The recovery period is lesser. I think that there is not much time away from the game for the bowlers and there is not much of an off-season.”

On Pat Cummins, who has had a share of injuries in his career, McGrath said the quickie had been doing a litle bit of work on his action.

“It is good to see him put together a few games together in a stretch after all the breakdowns he had endured.”

With regard to the ongoing Champions Trophy in England, he said India are going well at the moment and hoped Australia can win the last league game (against England) to advance to the semi-final.

“It is going to be a tough match. Rain has played a part in the tournament. Unfortunately that is the way it goes. It will be nice to get some fine weather,” he said.

Asked about the dispute between Cricket Australia and the players over contracts, he said, “It is an ongoing thing.

Unfortunate. Hope they work out it fairly quickly.” 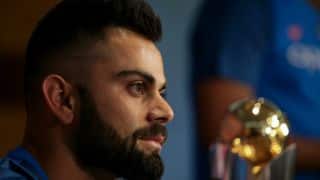 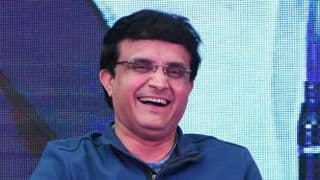 Sourav Ganguly to play football with Diego Maradona in Kolkata