Pakistan coach Dav Whatmore believes his side will have an edge over Australia when the two teams will meet for three One-Day Internationals and three Twenty20 International series in Sharjah, Dubai and Abu Dhabi starting on Tuesday. 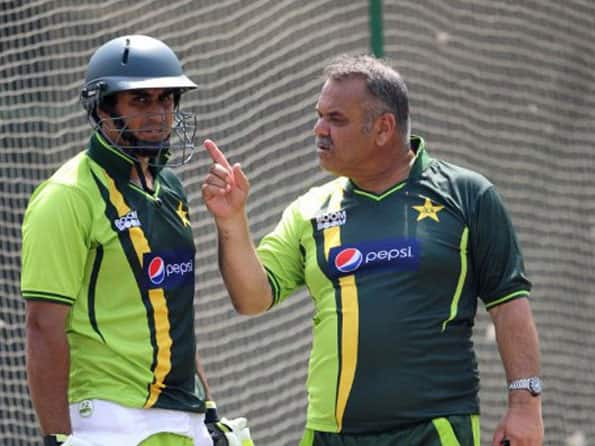 Pakistan coach Dav Whatmore believes his side will have an edge over Australia when the two teams will meet for three One-Day Internationals and three Twenty20 International series in Sharjah, Dubai and Abu Dhabi starting on Tuesday.

“They have had a retirement or two and an injury so I suppose the short answer would be yes,” Whatmore was quoted as saying by the official website of ICC on Saturday when asked if it was a good time to be playing Australia.

“It could be they will try even harder after they lost pretty badly to England … but conditions are more known to the Pakistan team so from that point of view we hold a bit of an edge,” Whatmore added.

Australia are currently placed fourth in ICC ODI Rankings while Pakistan lag two places behind them.

However, Whatmore believes that the current crop of players have the potential to succeed.

“I honestly thought we were one ODI victory away from (it) being a very good tour in Sri Lanka,” he said.

“From positions of strength we managed to snatch defeat and hand the game over. The Asia Cup was good so really it hasn’t been as bad as some people may think.

“The talent is definitely there, we just need to be a little bit stronger and win the mental battle a bit more and the team will be very competitive and consistent. We’re working on those sorts of things,” Whatmore added.

Whatmore also believes that there are a lot of expectations from Pakistan for ICC World T20.

“Those figures sound impressive so the pressure is on for us this time, particularly me,” he said. “It’s a challenge but I’ve always looked forward to these sorts of challenges,” Whatmore said.

“It is a volatile form of the game and all teams are paying due importance to the World Twenty20 so it will make for a good tournament but we would like to think we will be as good as we can be and if that is the case then I think we will be figuring somewhere,” he concluded.

Virat Kohli to India Under 19: Nothing like beating Australia in their backyard