Cummins has bowled the most overs across formats along with Kagiso Rabada and James Anderson in the past two years.

Over the years, Pat Cummins has become Australia s lethal strike weapon specially with experienced pacers Josh Hazlewood and Mitchell Starc making sporadic appearances due to injury issues. The 25-year-old pacer has bowled the most overs across formats along with Kagiso Rabada and James Anderson in the past two years that also sees him as the highest wicket-taker for his side in the period. (ALSO READ: In major boost to Australia s World Cup chances, Josh Hazlewood confirms return to bowling)

Cummins though is confident he will pull through both, the ICC World Cup 2019 and the following Ashes series in England.

“The World Cup is really busy but it’s about two games a week. Hopefully (I) can manage all that,” Cummins said in Abu Dhabi ahead of the third ODI against Pakistan where he could make a return after being rested from the previous two matches. (ALSO READ: Taylor, Chappell, Healy question Cricket Australia s ball-tampering review)

“You want to be playing all the games you can. I’m no different. It’s quite a long tour so probably managing in between games and how you train, just trying to give yourself every chance to play.”

After playing in the World Cup during June and early July, should the defending champions reach the summit clash, it will extend their load by another week with the final schedule on July 14 at Lord’s. Post that, the Aussies have just two weeks to recuperate before the first Test of the Ashes that is scheduled to begin on August 1. “I got no idea how we’re going to work out the World Cup schedule,” said Cummins.

“I think it is going to be one of those World Cup where you do need a whole squad of 15 playing and firing because it’s nine ODIs in (five) weeks. It’s going to be quite a big ask.” (ALSO READ: Selectors will have a massive headache to pick the World Cup squad: Nathan Lyon)

Keeping in mind, the upcoming workload, Cummins has upped his fitness quotient and is planning to work closely with the bowling coaches.

“In 2017, I came in and played two tests in India, then lots of white ball (cricket), another couple of Tests in Bangladesh and then another few ODIs in India and I found a couple of bad habits crept in, more just from not having a swinging ball,” he explained.

“I found in the last couple of years I’ve got a bit better at that, especially opening the bowling I’m always trying to swing the ball. When I’m swinging the ball, my action tends to be where I want it to be. (ALSO READ: Australia name Troy Cooley bowling coach for Ashes, Adam Griffith for World Cup)

“I was jumping in a lot. Whether it’s trying to bowl too fast and get a little more out of my action – I tend to jump in anyway but I was really jumping in (a lot) and my left leg was swinging all the way across and flicking around (my) body. It might get you an extra ‘k’ (kilometre of pace) or two but normally lose my seam and things like that. It’s about trying to get a little bit straighter and stick my arm up nice and straight.

“That’s going to be something I’m going to keep an eye on with the bowling coaches in England over the next few months.” 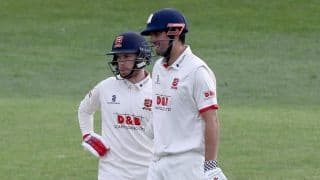