The previous fastest century in the women's BBL was by Ashleigh Gardner, who took 47 deliveries to reach the landmark last year.

Brisbane Heat opener Grace Harris Wednesday plundered the fastest century ever in Australia’s women’s Twenty20 Big Bash League, needing just 42 balls to reach three figures. In doing so she became one of the quickest women ever to make 100.

The West Indies’ Deandra Dottin holds the record in internationals, smashing an incredible century off only 38 balls against South Africa in 2010.

If you need us, we’ll be watching Grace Harris belt balls into the stands of the Gabba!

19 boundaries for the day, thanks for coming! #WBBL04 #WATCHME pic.twitter.com/jUgbCCjBIg

Harris’ epic unbeaten 101 helped her team beat the Melbourne Stars by 10 wickets at the Gabba in Brisbane, smashing five sixes and 13 fours. They needed just one run for victory when Harris was on 95.

After several swings and misses, she finally connected and whacked a huge six down the ground to ensure the win and write her name in the history books.

The previous fastest century in the women’s BBL was by Ashleigh Gardner, who took 47 deliveries to reach the landmark last year. 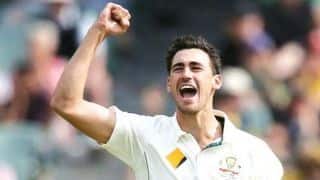 Mitchell Starc ready for surprises MCG pitch has to offer