Proud South African skipper Graeme Smith admitted it was hard work to score a double century against Pakistan on Thursday, three months after being on crutches due to ankle surgery. 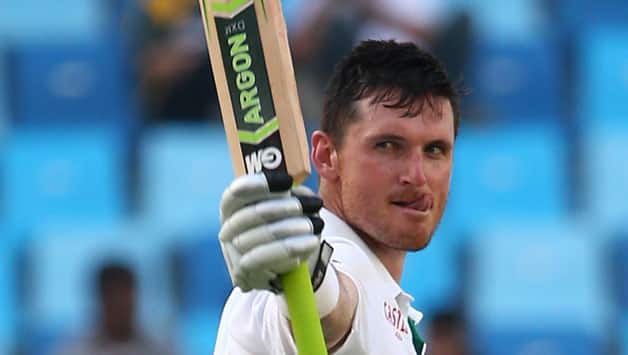 Proud South African skipper Graeme Smith admitted it was hard work to score a double century against Pakistan on Thursday, three months after being on crutches due to ankle surgery.

The 32-year-old left-hander hit a memorable 227 not out to steer South Africa to a commanding 460 for four after the second day in Dubai, for an overall lead of 361 in the must-win game.

He shared an all-time South African record for a fifth wicket partnership of 326 with AB de Villiers, who was unbeaten on 157.

“My ankle held up very well and I am very grateful,” said Smith, who also reached 9,000 runs in 112 Tests.
“I put in a lot of hard work over the period since I came off crutches. It was a big surgery and there were a lot of times when you think how it’s gonna hold and how it’s gonna be handled, and I think it paid off today.”

Smith put the second Test turn-around, after losing the first Test by seven wickets in Abu Dhabi, down to good planning.

“We got two low totals in that game so you have to improve. I back our batting unit 90 percent of the time do produce the goods and it’s nice to get this far here,” said Smith.

South Africa were bowled out for 249 and 232 in Abu Dhabi, but are now in a commanding position to preserve their seven-year unbeaten run away from home.

Their last away series defeat came in Sri Lanka in 2006.

Smith said his team would like to bat just once in the Dubai Test and force a win.

“I will think about it overnight and chat with the guys. Obviously I dearly want to bat once in this game, that’s the number one goal, and allow the the wicket to deteriorate more. It’s very dry, so we will definitely bat the morning session tomorrow,” said Smith.

Smith became the 12th batsmen overall and just the second South African behind team-mate Jacques Kallis to score 9,000 or more runs in Tests.

“I wasn’t thinking about those things. I don’t think I have ever been the most talented but I found the way how to score runs and understand how to do it and mentally found the way,” he said.

“Opening the batting for South Africa has its challenges, so to be at the point where I am is a big tick for me in terms of what I am able to achieve in my career.

“Obviously there is a lot more I want to do but there are milestones that make you very proud and there are not very many people that get to these points, not too many opening batters in particular, so I am extremely happy over the support I have got over the years.”