Smith said that he believes the conditions at the first Test suited Johnson's style of bowling.

South African Test captain Graeme Smith has put the blame on his team’s erstwhile ”fortress” Centurion Park, instead of Mitchell Johnson‘s pace attack as being responsible for their 281-run defeat in the first Test against Australia.

South Africa is more than happy to play on pace-friendly pitches but they prefer them to be much truer in bounce and potentially offering a bit seam movement to aid the likes of Dale Steyn and Vernon Philander, who were however, frustrated at Centurion, due to its overwhelming unevenness of the bounce.

According to Sport24, Smith was irked by the inconsistent bounce offered by the Centurion wicket and felt that the supposedly ”home” surface played into the hands of Australia’s bounce-generating left-arm spearhead Johnson, who earned career-best match figures of 12 for 127.

Smith said that he believes the conditions at the first Test suited Johnson’s style of bowling as he was able to extract every bit of life and uncertainty out of that wicket, which put South Africa under an immense amount of pressure, adding that he and his teammates have never seen the Centurion pitch behave like it did during the recent Test.

Although Smith believes that the wicket played a big role in Australia’s win, rival captain Michael Clarke however, buried the suspicion by saying that the wicket was a tough and a nasty one, adding that he would have hated to see his team batting on that on the last day. 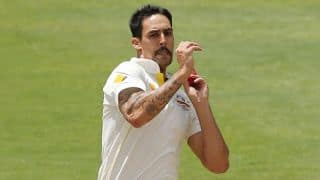