South Africa captain Graeme Smith was delighted by the 'perfect' way his side replaced England as the world's number one Test side as they held their nerve in a 51-run win at Lord's on Monday. 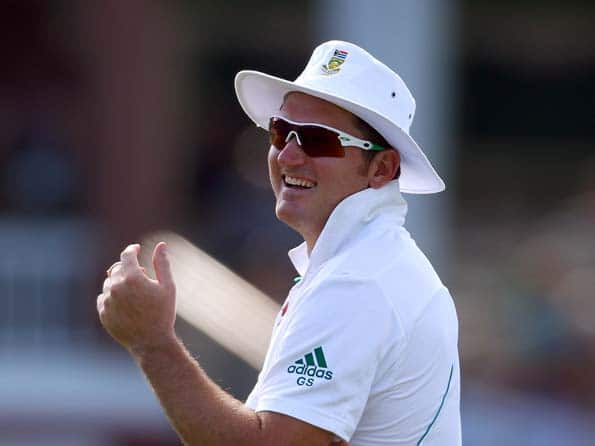 South Africa captain Graeme Smith was delighted by the “perfect” way his side replaced England as the world’s number one Test side as they held their nerve in a 51-run win at Lord’s on Monday.

Victory gave South Africa the three-match series 2-0 after they’d crushed England by an innings and 12 runs in the first Test across London at The Oval before the second Test in Leeds was drawn.

England, set an imposing victory target of 346 to win, were bowled out for 294 on Monday’s final day, with man-of-the-match Vernon Philander taking two wickets in two balls to end the contest as he finished with an impressive innings return of five for 30.

But there was a period when Matt Prior, who made a typically dashing 73 and Graeme Swann, with a rapid 41, threatened to take the match away from the tourists during an eighth-wicket partnership of 74 at better than a run-a-ball.

Previously the Proteas, who only needed to avoid defeat in this match to replace England at the top of the International Cricket Council Test rankings, might have stumbled or even “choked” — a derogatory term for squandering a winning position that has been applied to many other South Africa sides.

But they still had the new ball up their sleeve and with Smith, who took the slip catch to remove dangerman Prior off Philander’s bowling, calmly leading his side there was no panic out in the middle.

“The way it finished was perfect for us,” said Smith, who led South Africa to victory in England in 2008 — the last time England lost a home Test series.

“The biggest thing for us is to win when it’s tough and you are not always ahead of the game.

“We came here with England the number one team in the world. They are an outstanding team in their own conditions and to beat them at home is one of the great achievements of my career.”

The opener was wearing a shirt bearing the words ‘We miss you Bouch’, a tribute to former South Africa wicket-keeper Mark Boucher who was ruled out of the series after suffering a career-ending eye injury in a warm-up match against Somerset in Taunton.

South Africa’s two previous tours of England have seen Smith’s opposite number resign, with Nasser Hussain and Michael Vaughan both giving up the England captaincy.

Andrew Strauss, the current Test skipper, was equivocal about his own future.

The build-up to this match, Strauss’s 100th Test, was dominated by England’s controversial decision to axe star batsman Kevin Pietersen.

England dropped the South Africa born shotmaker, despite a superb 149 in the second Test, after it was revealed he’d sent “provocative” texts to Proteas players, allegedly including criticisms of Strauss.

Pietersen’s place was taken by Jonathan Bairstow, who impressed with innings of 95 and 54.

“I don’t think anything is going to be happening straight away,” Strauss said of the chance of ‘showdown’ talks with Pietersen.

“I said before the match, the issues that need to be resolved will take a while to be resolved and we’ll be looking to do that away from the public eye as much as possible in the coming weeks.”(AFP)