South Africa Test captain Graeme Smith has accepted that he is under pressure to score runs for his team, and said that he won't mind turning selfish to improve his individual performance in the upcoming season. 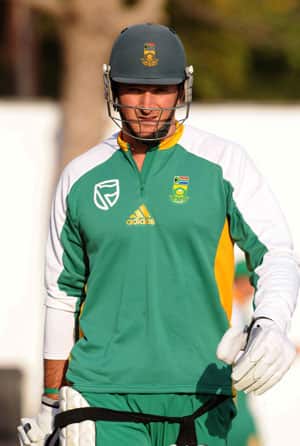 South Africa Test captain Graeme Smith has accepted that he is under pressure to score runs for his team, and said that he won’t mind turning selfish to improve his individual performance in the upcoming season.

“We’re heading into a tougher period of training ahead, but I’m really excited even if I don’t really enjoy this pre-season time as much as just batting in the nets. The World Cup was tough, but I’ve had time to regroup and I’m looking forward to performing in a way that makes South Africa proud,” Smith was quoted by web portal Super Sports.

Smith, who recently got married to his long-time girlfriend Morgan Deanne said, “I’m looking forward to being a bit more selfish, just working on my game. I want to produce my fair share of runs and I hope I bat better this season. I’m doing the work now to achieve that and I’m focused on performing in all formats of the game.”

The left-handed opening batsman said he will help the two new captains — AB de Villiers and Hashim Amla with his experience.

“My main role is to provide strength to the batting department, but if AB or Hashim need me, I am an experienced campaigner and I will be there for them. But they are two wonderful cricketers and I’m sure they’ll do an outstanding job,” he added.

Gary Kirsten, the South Africa coach is confident that Smith will soon get big scores for his team. “Graeme has been in that captain’s seat for eight years and it takes its toll – it’s a lot of responsibility. But it’s very important for South African cricket that Graeme Smith scores a heap of runs,” Kirsten said.

“Everybody is just itching to get out there and play and the new management and leadership makes it an exciting time. It’s fantastic that Graeme is still the test captain, so he can help AB develop as a captain, which is very exciting and a very important role,” he added.