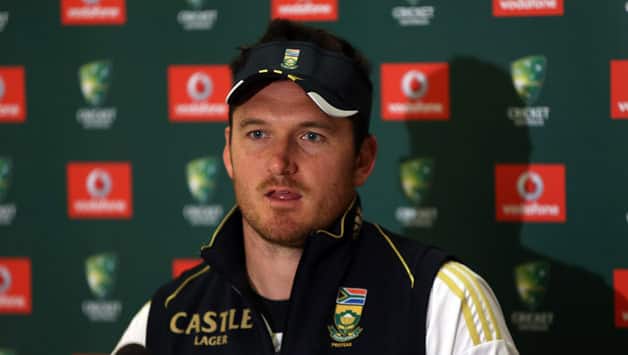 Spinner Imran Tahir takes over from paceman Rory Kleinveldt, who was wicketless and ineffective on his Test debut in Brisbane Getty Images

The Proteas have made two changes for the second Test, bringing in Tahir and debutant Faf Du Plessis, following a draw in the first Test in Brisbane.

Tahir takes over from paceman Rory Kleinveldt, who was wicketless and ineffective on his Test debut in Brisbane, while Du Plessis comes in for the injured JP Duminy.

Adelaide traditionally takes spin late in the match and Smith is banking on wrist-spinner Tahir to make a valuable contribution with his wrong’un turning away from the left-handers.

Australia’s team is stacked with five left-handers among its top seven batsmen and the Proteas are banking on Tahir to make an impact after being left out of the series opener on an unresponsive Gabba wicket.

Pakistan-born Tahir, 33, has captured 26 wickets in 10 Tests since his debut against Australia in Cape Town last year and Smith is confident he will do his bit in Adelaide.

“Hopefully there’s a lot of rough (bowlers’ foot marks), not for me, but for the Australian left-handers and he’s certainly used the rough well in the times he’s played for us,” Smith said.

“He created a lot of stress for Andrew Strauss and the left-handers in England so the wrong’un turning away from the bat is not a bad option. He’s got enough to really contribute in this game.”

Smith added that Tahir must have faith in himself to stick at it over the five days of a Test match.

“Naturally, he’ll be anxious to always do well, that’s Imran’s personality, but he’s contributed in key ways for us over the last few Test matches and his role is important,” he said.

“Not everything is going to go your way in Test cricket, but you have to be able to find a way to contribute over those five days and I think Imran has done that well for us and I think all of us would love to see him pick up a huge wicket haul.

“Imran is the frontline spinner and we’ve backed him.”

Smith said it was also a great opportunity for Du Plessis, who has played 26 one-day internationals and four Twenty20 internationals for his country.

“I think Faf is in the same mould bowling as JP (Duminy),” Smith said.

“He can play a role and obviously by picking Imran he will front up for the majority of that spin option, but having Faf available is having someone else in the group who can contribute.

“I think he’s had a high standard in the last few years. He’s played a role in the one-day and Twenty20 formats and I know he’s really excited to get the opportunity to play Test cricket.”

Smith said the South Africans, particularly the bowlers, were looking to improve after fading in Brisbane after scoring 450 in the first innings.

It will be the second Test match for the Proteas since they attained the number one ranking and expectations are high for a crucial win which could ultimately win the series.

“For us a disappointment in a draw is good for us, it shows that people expect us to play well and to perform well and that’s exciting for us,” Smith said.

“We come to Adelaide knowing there are a few areas where we can definitely improve on.”