A proud Smith stated that very few teams could bounce back like his team in the 2nd Test.

South African captain Graeme Smith said the turnaround after a 281-run defeat of Australia in the first Test at Centurion was a tribute to the resilience of his players.

“The week building up was a tough week for us. We needed to be smart, we needed to be clinical. We needed good ideas as to how we were going to respond. I don’t think many teams would have been able to respond from a defeat like we tasted.”

Smith said the match had been set up by a solid first innings of 423, followed by good bowling. “The intensity we showed with the ball in both innings was really impressive on a wicket which didn’t offer that much.”

Dale Steyn‘s sensational post-tea spell came after he appealed vociferously for a catch behind when Chris Rogers was on 69 in the over before tea.

With the St George’s Park band in full swing, the slip cordon didn’t hear what replays showed to be a faint edge and South Africa did not seek a review when Rogers was given not out.

Asked how angry Steyn had been after the missed opportunity, Smith quipped: “I think he goes from being very angry to extremely angry most of the time when he is bowling. We always know that Dale is one spell away from creating something for us. It’s great to see when the game is on the line that he can respond like that.”

Part-time off-spinner JP Duminy made the breakthrough when he trapped Warner leg before wicket for a sparkling 66, made off 73 balls.

South Africa took four top order wickets for four runs after tea to swing the game in their favour, with Alex Doolan, Shaun Marsh, Clarke and Steve Smith falling for 5, 0, 1 and 0 respectively.

Marsh was out first ball to Vernon Philander to complete a “pair”.

Rogers, who scored only ten runs in his first three innings of the series, looked in good touch from the start of his innings, taking advantage of some over-pitched deliveries early on and almost keeping pace with Warner during what was easily the most productive opening partnership by either side during the series.

With Australia seven down, South Africa claimed the extra half hour available if a result was likely and took the last three wickets with a possible 14 balls remaining.

South Africa were without injured left-arm fast-medium bowler Wayne Parnell but Smith juggled his bowlers well and made good use of his part-time spinners.

Hashim Amla completed his 21st Test century — and his fifth against Australia — and finished on 127 not out when Smith declared at 270 for five. South Africa added 78 runs in 17 overs on Sunday. 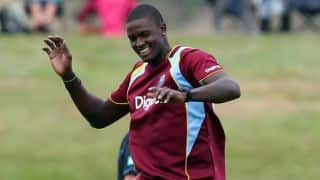 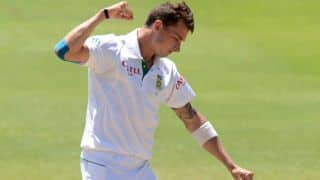