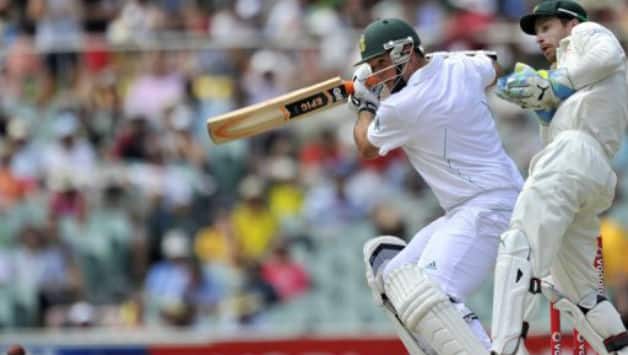 Skipper Smith knuckled down to carve out his 26th Test century with a belligerent unbeaten 111 as the Proteas clawed back to 217 for two in the chase after Australia’s hefty 550 first innings.

The world’s number one ranked outfit had little to cheer on Thursday’s first day as Michael Clarke plundered his fourth double-century of the year and David Warner and Mike Hussey rifled rapid-fire tons to put the Proteas on the rack.

But Smith lifted spirits and team resolve with his fighting hundred to give the South Africans a chance of going on to win this high-scoring encounter over the concluding three days under forecast searing temperatures.

The skipper has proved a lucky charm with his tons for South Africa. The Proteas have not lost the match in the previous 25 Tests in which he has scored a century.

“Yesterday was a tough day. The way he gets the guys to keep going and get us up, I think it’s unbelievable,” said paceman Morne Morkel, who triggered an Australian late-order collapse Friday with his five-wicket haul.

“I think it’s the sort of experience you don’t buy at the supermarket. He’s a fantastic leader and we’ve seen it again today.

“We needed a guy up front to be solid and he’s still there. I hope tomorrow can be a really big day for him.”
Smith had some fortune on his way to his valuable hundred.

The powerful left-hander advanced down the wicket to spinner Michael Clarke on 46 but was given a let-off when wicketkeeper Matthew Wade badly fumbled the stumping chance.

The Proteas skipper was later given out caught behind off James Pattinson on 78 but the review’s Hot Spot infra-red imaging system could not detect any touch and umpire Richard Kettleborough’s decision was reversed.

“We’ve got the utmost respect for him. He’s done amazingly well over a long period of time,” Hussey said.

“He must have such strong mental strength to play with such determination, with the extra burden of being captain on his shoulders to have to come out in those pressure situations and perform consistently.

“It’s a great achievement. He has a lot of mental toughness, there’s a lot of character about the guy, a lot of determination and passion for his country. And he can be a frustrating guy to bowl to as well.

“He’s a much admired player in our dressing room.”

Morkel said South Africa will be fighting to play their way back into the Adelaide Test after Thursday’s soul-destroying day.

“We’re a team that realised and knew what needed to be done. The time for talking was over so we needed to react and we needed to step up,” Morkel said.

“I know it wasn’t our best performance yesterday but it was also a performance we needed to put to bed.

“This team always finds a way to fight back and I think you can never count us out and we’ll fight hard for the next few days and hopefully we can go well.”

India vs England 2012 Live Cricket Score: India reach 87/3 at Lunch on Day one at Mumbai