Smith had tweeted that he is sharing his batting skills with the kids at St. Andrews Primary in Saldanha Bay.

Former South Africa captain Graeme Smith has shown that he own Twitter trolls as he schooled a critic on social media regarding his ‘dodge technique’.

Smith scored 17,596 runs for South Africa before retiring in March 2014. His critic got involved in a ‘twar’ with the former South Africa star after he was pictured sharing his batting skills, Sport24 reported.

Smith had tweeted that he is sharing his batting skills with the kids at St. Andrews Primary in Saldanha Bay.

The tweet prompted a response from an armchair critic with the username ‘@lunga188’ and he tweeted that Smith is messing up that kid for life, adding that look at the kid’s bottom hand and warning that he would be falling over in Grade 8 getting ‘LBW’d’.

And Smith re-tweeted back the same replying that the kid might just score over 17,000 runs for South Africa.

Smith’s reply prompted the critic to jokingly retweet that maybe the kid would score 17,000 runs as long as Zaheer Khan isn’t reincarnated, ‘lol’. He praised Smith for still being a great captain with that dodge technique. 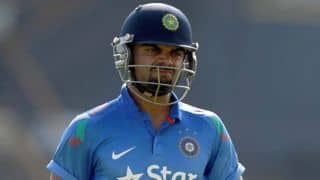