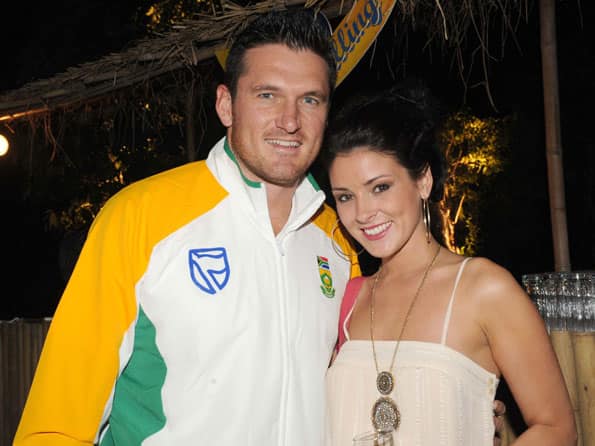 The Sunday Times weekly newspaper said the couple exchanged vows at an intimate ceremony at St Bernard Catholic Church in Claremont on Saturday and afterwards joined family and friends at a reception overlooking the Atlantic Ocean.

Both Smith, 30 and Deane, 26, took to Twitter just before the ceremony.

Deane twitted:”Today I’m getting married to the man of my dreams,” while Smith tweeted: “Thanks for all your positive vibes!! Most exciting day of my life.”

The couple got engaged in April when Smith flew to Ireland to pop the question after the Proteas’ shock 49-run defeat to New Zealand sent them crashing out of the Cricket World Cup in March.

His move angered South African fans who accused him of dodging the fallout of the Proteas’ exit when he did not return home with the team after their quarter-finals loss.

However he apologised to the fans for not returning from India with the team after the World Cup exit, saying he should have explained his reasons earlier.

The Sunday Times said Deane arrived at the church, which was decorated with arum lilies, in a black Bentley sporting a white ribbon. She emerged wearing a white silk dress and towering white peep-toe pumps holding a bouquet of white roses.

Smith wore a navy suit and tie with a white shirt.

Friends and family of the bride flew in from Ireland for the wedding.

Resilience and hardwork won us the Trent Bridge Test, says Prior